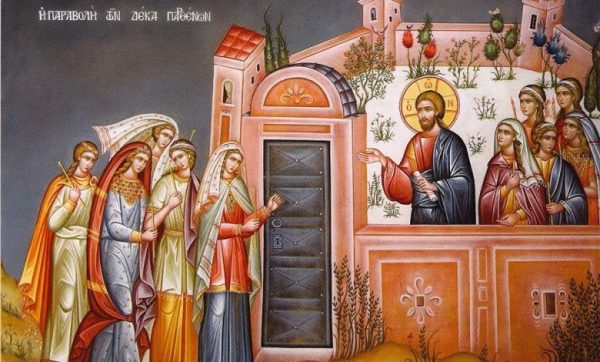 The five wise virgins, watchful and alert, had taken oil in the vessels of their heart. That oil, not part of their own nature, means the grace of the Spirit. They were enabled to enter with the Bridegroom into the heavenly bridal chamber.

The other five virgins, however, were content with their own nature. They neither watched nor busied themselves to receive the oil of gladness [Ps. 44:6] in their vessels, while they were yet in the flesh. Instead, they sank into sleep through carelessness, slackness, idleness, and ignorance, or even fancied righteousness. Hence, they were shut out of the bridal chamber of the Kingdom, unable to give satisfaction to the heavenly Bridegroom. Held fast by their tie to the world, and by some earthly affection, they did not give their whole love or passionate devotion to the heavenly Bridegroom; thus they were not provided with oil.

Souls that seek the sanctification of the Spirit, which is outside of nature, fasten all their affection upon the Lord. It is in the Lord that they walk, pray, and employ their thoughts, turning away from all else. For this cause, they are privileged to receive the oil of heavenly grace. This enables them to succeed in coming through without falling, giving perfect satisfaction to the spiritual Bridegroom. Those souls, however, content with what belongs to their own nature, creep upon the earth in their thoughts. Not only do they employ their thoughts upon earth, but their minds have their whole existence upon earth. In their own estimation, they appear to belong to the Bridegroom, and to be adorned with the ordinances of the flesh. Nonetheless, they have not been born of the Spirit; and they have not received the oil of gladness.

This parable admonishes us to remain diligent in almsgiving. It counsels us to help our neighbor by every means available to us, since it is impossible to be saved in any other way….

For nothing is more sullied than virginity without mercy … What was the profit of virginity, when they saw not the Bridegroom? Even when they knocked at the door, they did not obtain; instead, they heard the fearful saying, “Depart, I know you not”. When he said this, nothing else but hell is left, and that intolerable punishment….

This parable was spoken with respect to mercy in almsgiving … It is also that we might learn how close Christ is joined unto virgins that strip themselves of their possessions; for this indeed is virginity.

(Homilies on the Gospel of Matthew, Homily LXXVII)

As it is written: “The day of the Lord shall come as a thief in the night” (1 Thess. 5:2). Then the virgins shall awake, because both good and wicked are roused from the sleep of death. They shall trim their lamps, that is, they shall count the number of their good works for which they hope to receive the reward of eternal happiness. However, the lamps of the foolish virgins shall fail. This is because their works, seen so clearly by men, shall wane and vanish at the coming of the Judge. From God, they shall receive no recompense, for men gave them the praise they esteemed so highly.

The blessed will rejoice in their recompense, when they enjoy that vision of Him in Whose presence the elements tremble. They will then go in with Him to the marriage. As they rejoice in the nuptials of the Bridegroom, they themselves will be the bride; for in the bridal chamber of the eternal Kingdom, they are united forever to their God. Thenceforth, that vision can never be snatched from them. The door of the Kingdom will close forever upon those left outside, who then will weep.

However, that same door is now open to all penitents. There will be repentance then, but it will be fruitless. When the Bridegroom comes, those that wasted time that might have be used for repentance shall not find pardon. Thus St. Paul warns us: “Behold, now is the accepted time; behold, now is the day of salvation” (2 Cor. 6:2). The Prophet Isaiah says: “Seek ye the Lord, and when ye find Him, call upon Him” (Is. 55:6).

(Parables of the Gospel, “The Ten Virgins”)