Lent is a time for us to venture out of our living rooms and comfort zones, to move away from the television, to suspend the mail-order DVDs and endless, mindless video games in order to worship God, live life and serve others by giving those in need what we have in spades.
Priest John Parker | 28 February 2009 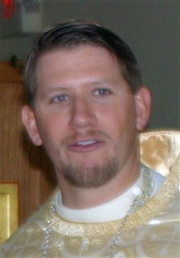 Father Parker is a writer and the priest-in-charge of Holy Ascension Orhtodox Church in Mount Pleasant, South Carolina, near Charleston. Today, he tells us how the start of Great Lent differs from the Western customs of Mardi Gras and Ash Wednesday

This is Mardi Gras (French for “Fat Tuesday”), at least as it is celebrated in the streets of places such as New Orleans, Rio and other major cities around the world.

What is the purpose of such a day? According to one New Orleans Mardi Gras Web site: “Human nature being what it is, people are inclined to go on a bender immediately before a period of deprivation, prayer, and fasting. Hence: Fat Tuesday.”

In the Western Christian church, Mardi Gras is the day before Ash Wednesday. Remnants of the true nature of Fat Tuesday still are visible in many churches as Lent begins. More often called “Shrove Tuesday” (from “to shrive,” to hear the confession of and to absolve a penitent of sins), this is the day on which folks empty out their cabinets of fats – meat, cheese, butter, etc. – items from which Christians traditionally have fasted during the 40 days prior to Pascha (Easter).

Orthodox Christians enter Great Lent differently, still following the most ancient pattern of prayer and fasting. Rather than a single day of pantry-emptying, the Orthodox first abandon meat on “Meatfare” Sunday, and then dairy, wine and olive oil on the following, so-called “Cheesefare,” Sunday, allowing for a gradual entrance into what we call the Great Fast. In the Orthodox tradition, this fast is kept daily during all 40 days, with a few festal exceptions. Prayer, fasting and almsgiving, along with confession of our sins, remain the central focuses of Lent, as we prepare for the most glorious Christian feast of the year: Pascha, the resurrection of Jesus Christ from the dead.

The Great Fast, as the Orthodox also call it, begins not with parties, suppers or benders, but with one of the most moving services in all of Christianity. In the evening of Cheesefare Sunday, the church serves Forgiveness Vespers. At the tail end of this sung service of evening prayers, every individual in the parish, beginning with the priest, asks of and offers forgiveness to every other individual present. During this solemn and often deeply emotional portion of the service, the choir sings the bright, joyous hymns of Pascha, a foreshadowing of the glory to come.

Still, it is easy to see, from a popular cultural perspective, why many, even Christians, see Lent as “deprivation” or some sort of dark period marked in ancient days by hair shirts, and even today by intentional discomfort, sadness, guilt and gloom. The switch from having what we want on a moment’s notice all the time to living merely with what we need, and in measured portions, comes as a shock to our bodies, wills and lifestyles.

But Great Lent is the opposite of doom and guilt.

It is our return from exile. It is the joy of forgiveness, which is our release from true guilt in repentance. It is our return from what has become a regular life of loose or riotous living in a far-off land, as it is described in the Parable of the Prodigal Son in Luke 15. If New Orleans’ famous Mardi Gras has any relation to the Christian Shrove Tuesday and the ensuing fast of Great Lent, it is this: It is a prime-time, public, regular and celebrated example of the way we live our day-to-day life: drunk, stuffed, self-interested, careless and promiscuous.

From a Christian perspective, this is true actually as much as figuratively, if statistics are even remotely accurate with respect to alcoholism, obesity, divorce, crime and the like. Sadly and embarrassingly, the Christian statistics are the same as — or worse than — the secular culture in many of these areas.

So following the example of our Lord, who entered the wilderness to pray and fast and to face the devil, we, too, do the same for 40 days. Our task is twofold: first, to see who we have become when left to our own devices: sinners who have distorted God’s creation, beginning with ourselves; and second, to become who we are called to be by the grace of God: merciful saints as we see in Matthew 5:48 and Luke 6:36.

We fast from certain foods and drinks because by our sin, we abuse these in gluttony and drunkenness, not because food and drink are inherently bad. In the fourth century, St. John Chrysostom went so far as to say that the food in our pantry (paraphrased) is to our damnation since it belongs to the poor and hungry who have no daily food. Our fasting is not for God, like some cosmic payoff scheme (“I’ve been bad, so I’ll be good for sometime; please don’t punish me!”). Rather, it is for us to see that food and drink are merely fuel that keeps our bodies running so that we can live godly lives in the short time we have on this Earth. Along with our fasting, we put on moderation and sharing.

We fast from entertainment in order to see the world as it truly is, not how Hollywood portrays it. How horribly are our eyes tainted by television and movies! In our daily lives, we have come to accept murder and violence as forms of diversion. Gross language, perversion, adultery, lying, betrayal and lust are seen as normal and normative. By abstaining from watching shows and movies that flaunt such behavior while at the same time engaging ourselves in real life with real people, we can see more clearly how such living is actually vacant and damaging to all involved, not to mention far from the life Jesus Christ demonstrated for us. Along with our fasting, we put on mercy and compassion.

During the Great Fast, married couples are challenged to fast, by mutual consent, from nuptial relations following 1 Corinthians 7:5ff. (It is assumed that this is the daily practice at all times for all Christians who are not married.) Once again, this is not because sex is bad — au contraire! But even in marriage, we fall into the sin of treating one another as objects, and such an “agreement for a season” is to re-establish our godly love for one another. Along with our fasting, we put on abstinence and self-control.

Great Lent is a return to spiritual, emotional and physiological training. It is an intense time reorienting ourselves to the life God has established for us.

One significant facet to this season of prayer, fasting and almsgiving is lifted right out of the Old Testament prophecy of Isaiah: “Is not this the fast that I choose: to loose the bonds of wickedness, to undo the thongs of the yoke, to let the oppressed go free, and to break every yoke? Is it not to share your bread with the hungry, and bring the homeless poor into your house; when you see the naked, to cover him, and not to hide yourself from your own flesh?”

This is not a call to generic social justice or a longing for some unattainable better society; rather, it is a Christian imperative to stop thinking about ourselves alone and to start loving our neighbors, especially those who are in need.

But to begin to love our neighbor requires us to know that he or she exists. Lent is a time for us to venture out of our living rooms and comfort zones, to move away from the television, to suspend the mail-order DVDs and endless, mindless video games in order to worship God, live life and serve others by giving those in need what we have in spades.

All of this effort we call Lent is beautifully summarized in a fourth-century prayer still prayed daily during Lent in the Orthodox churches. The prayer of St. Ephraim the Syrian reads: “O Lord and Master of my life, take from me the spirit of sloth, despair, lust of power, and idle talk. But give rather the spirit of chastity, humility, patience, and love to thy servant. Yea, O Lord and King, grant me to see my own transgressions and not to judge my brother. For blessed art thou unto ages of ages. Amen.”

God help us all so to live, beginning afresh today.