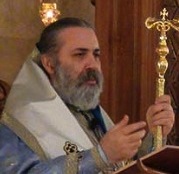 Greek Orthodox Archbishop Boulos Yazigi and Syriac Orthodox Archbishop Yohanna Ibrahim were seized near the northern commercial and industrial hub of Aleppo, which is contested by rebels and forces loyal to President Bashar al-Assad. Their whereabouts remain unknown.

Gunmen pulled the Bishops from their car and killed their driver. Church officials said it’s believed the gunmen are Chechen fighters from the al-Qaida-affiliated Jabhat al-Nusra group, one of the most powerful of the myriad of rebel factions fighting in Syria to overthrow the regime of Assad.

The main Syrian opposition group, the Syrian National Coalition, condemned the kidnapping and blamed Assad’s regime. Pope Francis called for the rapid release of two bishops. In his appeal the Pope called the abduction “a dramatic confirmation of the tragic situation in which the Syrian population and its Christian community is living.”