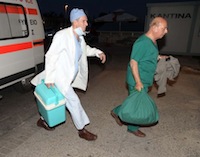 Senior clerics and church organizations are leading a campaign in opposition to a law, due to come into force on June 1, that will ease restrictions on organ donations.

The chief focus of objections has been a legal provision regarding so-called “presumed consent” that would allow the donation of organs without the consent of a potential donor’s relatives or co-habitors.

A group of church groups and clerics are reportedly considering appealing to the Council of State to revoke the law despite the watering down of the “presumed consent” provision, which now requires the approval of the next of kin.

Several Bishoprics have joined the campaign, including that of Piraeus, the seat of the Bishop Serapheim, which had issued a statement in January claiming that the new law puts Greeks at risk of having their organs plundered against their will. “We are all at risk of being killed before we die,” the statement had read.

Church organizations have held seminars warning Orthodox believers that the bill constitutes “organ theft.” The Orthodox Church has not been as outspoken about the bill in public though several clerics have challenged the concept of “brain death,” with some describing it as an “ideological construct for the promotion of organ transplants,” media reports said.