Present at the meeting were Metropolitans Methodios of Boston and Savas of Pittsburgh and Bishops Andonios of Phasiane and Sevastianos of Zela. The other members of the Synod, absent from the meeting, were unable to attend.

The two-day Archdiocesan Council meeting, held at the Washington Marriott Wardman Park Hotel began with the individual committee work on Thursday, May 1, while the Executive Committee of the Council held a full day meeting, the day before Wed. April 30. The Archdiocesan Council committees assessed the progress, new initiatives and proposals in the various fields of ministry of the Church and prepared their reports for the whole body.

The next morning, Friday May 2, the Archdiocesan Council began its work with prayer and reflection on the Paschal season by Archbishop Demetrios. His Eminence in his opening remarks, apprised the body of the Synaxis, the meeting, of the heads of the Orthodox Autocephalous Churches, which took place at the Ecumenical Patriarchate, last March. The Archbishop said that the Synaxis decided on convening the Holy and Great Synod of the Orthodox Church, to be presided by the Ecumenical Patriarch, in the Spring 2016, in the Church of St. Irene in Constantinople, where the Second Ecumenical Council was held on 381 AD. The notion of the universality of the Orthodox Church, said the Archbishop, is important knowledge for our faithful and our local parishes. 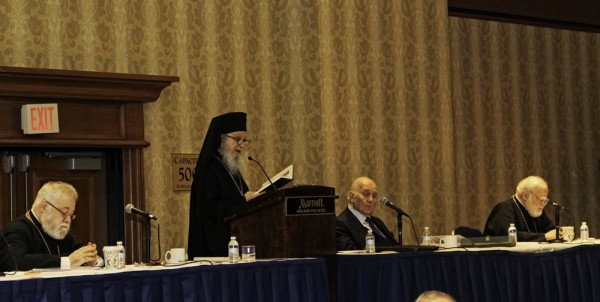 Archbishop Demetrios also informed the Council on the rebuilding of the St. Nicholas Church, which is now in its final preparatory stages as “ground-breaking” is anticipated in a few weeks. He said the fundraising campaign for St. Nicholas has already started and he spoke of the impact this symbol church and its visibility would have on the international projection of the Orthodox Church and Faith. His Eminence also discussed the upcoming 42nd Clergy Laity Congress to be held in Philadelphia, July 6-10, 2014. He spoke about the theme of this Congress, “The Orthodox Christian Family: A Dwelling of Christ and a Witness of His Gospel,” saying that the family today suffers and bleeds and we need to stand by the family and its members and support and care for all family members, children and adults alike.

Mr. Michael Jaharis, the vice-president of the Archdiocesan Council, shared his thoughts and proposals on a series of administrative issues related to the Archdiocese. He said that the Archdiocesan Council has to ensure that the Archdiocese has the people and the tools to do the job. He also said that the potential for growth in the Church is greatest here in the United States. Mr. Jaharis spoke of the importance of the rebuilding of St. Nicholas. He said that it should not be a church built just by wealthy donors, but it is imperative that the fundraising campaign is successful with the participation and inclusion of all our faithful and parishes.

Eleven committee reports on the National Ministries of the Archdiocese were presented to the Council and discussed: Marriage and Family, Communications, Ecumenical Office, Greek Education, Religious Education, Administration, Finance, Stewardship, Outreach and Evangelism, Clergy Outreach and Development and Youth and Ionian Village. It is noteworthy that the Finance Committee reported that all debts to banks and credit lines were eliminated as of the end of the first quarter of 2014.

Most viewed articles
What Is Rejected Becomes the Cornerstone121
The Forgotten Virtue of Stability93
Hierarch of the Jerusalem Patriarchate Speaks in Support of His Holiness Patriarch Kirill92
Utah Church Prepares, Welcomes All for Consecration89
His Beatitude Patriarch Theophilos III and bishops of the Russian Church Abroad attend a concert marking the 150th anniversary of the birth of Sergei Rachmaninoff in Jerusalem88
The Savior of the Hopeless, or Is It Possible to Be a Good Person and Not Be Saved?74
Supreme Court Overturns Roe v. Wade in Mississippi Abortion Ruling66
‘The post-Roe generation’: Pro-lifers set their eyes on heartbeat bills, chemical abortion bans65
Most popular authors
Pravmir.com team269
Archpriest John Moses (+2019)121
Hieromonk Gabriel93
Alexander Tkachenko74
CBN News66
Ryan Foley65