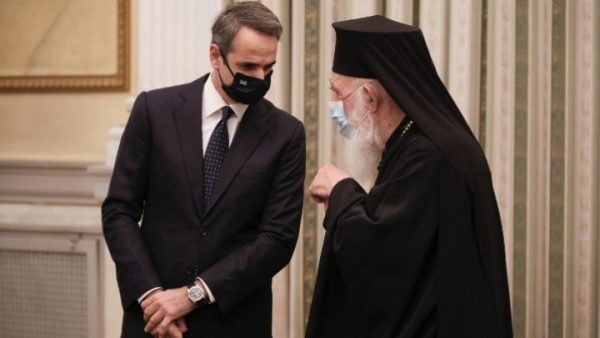 The Church must assume responsibility in preventing the spread of Covid-19, Prime Minister Kyriakos Mitsotakis told Archbishop of Athens and All Greece Ieronymos on Tuesday, reports the Greek Reporter.

Mitsotakis sought to defuse the tension with the Church hierarchy that has arisen with respect to the celebration of Epiphany, on Wednesday, January 6.

During a brief meeting on the sidelines of the ceremony to swear in the new members of the cabinet, Mitsotakis expressed his concern over the Church’s decision to defy the restrictive measures that were put into place to prevent the spread of Covid-19.

On Monday, the Holy Synod voted to defy a government ban on church services for Epiphany on Wednesday.

The Synod issued a statement saying that its churches would open just as originally planned for liturgies celebrating the Feast of the Epiphany.

It said they will be celebrating the usual liturgy and the iconic blessing of the waters ceremonies, which are a highly-anticipated part of the celebrations of the day every year.

The Greek PM urged the Church to assume its share of responsibility and to assist in the great effort to minimize the repercussions of the pandemic, thus enabling children to return to school as soon as possible.

He also highlighted the need for everyone to strictly follow the health rules and measures and said that the Church had an obligation to provide a good example, as it has done until today, and to support the common effort.

“We are asking for the cooperation of the Church. We are hoping that the Church will reconsider its position,” alternate government spokesperson Aristotelia Peloni said on Tuesday.

Peloni confirmed that a meeting was held between Mitsotakis and Archbishop Ieronymos.

She noted that the government has been in constant consultation with the Church since the start of the pandemic and admitted that the Church, on its part, has shown a very responsible attitude on the whole.

As for the reason for the government’s decision, she explained that the return to the previous restrictions was deemed necessary to protect the epidemiological picture ahead of the priority given to reopening schools, noting that everyone must cooperate for this purpose.