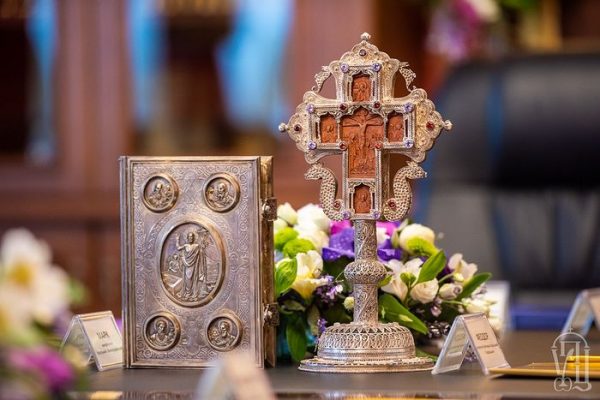 In a surreal move, governors of several states banned religious worship. The governor of Wisconsin, for example, specifically included religious worship in his ban on gatherings greater than 10 people (which naturally applies to all but the very smallest mission congregations and would have banned even Christ Himself from congregating with His 12 apostles), while the governor of New York banned all “non-essential” gatherings of any size. (It is unclear at this point whether Andrew Cuomo would consider the celebration of the Eucharist–even by just one priest and one chanter–to be essential, but my best guess is that he would not.)

Not wishing to minimize the danger of the present situation and the urgent necessity for everyone to do their part in protecting the health and life of the elderly, the vulnerable, and everyone else, I, nonetheless, do have some concerns about the government closing churches.

I think that all of us are prudently complying with all of the recommendations and orders from government agencies–at least for now–but for how long? Can the government ban the public celebration of Pascha in 29 days, and would we have to hide in our basements with the doors shut for the fear of the state police? I am not a virologist, but even I know that the new coronavirus will still be here in mid-April. In fact, experts estimate that it will still be with us through the summer. Pentecost? Will Divine Liturgy not be celebrated in the U.S. for the next half-a-year? What is the threshold at which the government will allows us back into our churches? As of today (March 20), there are 15 thousand reported coronavirus cases in the U.S. This number can only go up. It will not go down. The number of new cases reported in the U.S. was the highest on March 9 at 194 cases. This number will also go up and likely stay up from now on as we learn to live with the new virus in the world. In comparison, the CDC estimates that so far this season there have been at least 38 million common flu illnesses (over 200 thousand new cases every single day), 390,000 hospitalizations and at least 23,000 (and as many as 59,000) deaths from flu. [*] Last season (2018-2019), nearly 36 million people in the U.S. got the flu, almost 500 thousand were hospitalized, and almost 35 thousand of them died. During the 2018-2019 season, 80,000 people died of the common flu in the U.S. Is this enough to order the closure of churches from October through April every year? What are the exact numbers/percentages/trends/rates that give governors the power to suspend our right to worship as we find meaningful and not by sitting in front of a computer or television screen?

Furthermore, do governors have a legal ability to disband monasteries? Sure, residential buildings are excluded from the ban on gatherings, but as soon as the monks or nuns walk from their cells across the courtyard to a chapel, they are in violation of the ban on gatherings for religious worship. The problem is that the ban applies equally in Manhattan and Jordanville, NY. Perhaps, this is me being alarmist, but who thought just two weeks ago that governors could shut churches?

I repeat, I am not a medical doctor or an expert on viruses, and I would urge everyone to follow the advice of experts and the direction of local governments, but shouldn’t someone ask the obvious question: What is the benchmark by which the Holy Eucharist is suspended? What will be the marker at which the faithful are once again allowed to partake of the Body and Blood of Christ, our Savior and Healer? Can we trust politicians not to politic and pander to the various political forces in making their decisions–even just a little bit?

Here is something interesting to consider. The governor of Texas, Gregory Abbott, when issuing a ban on public gatherings of 10 or more people, stated that “there was nothing specific in the executive order about churches because there is freedom of religion here in the United States of America.” He added that most churches were already doing the proper thing by ensuring the safety of their congregations. But this is a very refreshing stance: the governor did not find himself in authority to ban religious worship. Indeed, churches are not in the same category as bars and movie theaters. So, who is right–Governor Abbott or Governor Evers? Can governors in principle ban the celebration of the Eucharist, or does this violate our religious freedom?

I will repeat for the third time for those who missed the first two disclaimers: I am strongly urging everyone to follow the direction of their pastor, bishop, governor, family doctor, CDC expert, etc., and pray  and hope that all of these measures will be successful. However, if they are successful, will this experience embolden the secular authorities to close churches again next year if there is an outbreak of the common flu (like in 2018), or the swine flu (last epidemic 2009-2010), or measles (last outbreak 2014-2015), or pertussis (last outbreak 2014-2015, and we are due for another one), or Zika (last epidemic 2015-2016), or any other communicable illness? Will the Holy Eucharist be routinely put in the same category as public gyms and concerts? The Wisconsin ban on gatherings, for example, while specifically including “movie theaters, taverns, pools, places of worship and religious gatherings” specifically excludes “airports, mass transit, hotels and motels.” Makes good sense, of course, but is the Body of Christ less essential than motels and more dangerous than mass transit? Maybe I am just being silly, but I am somewhat hesitant to put my full trust in our dear leaders to make this determination.