Natalya Mihailova | 07 May 2014
NOVOCASTRIANS will be able to gain insight into one of the holiest places on earth this week. Newcastle artist Lee Zaunders-Maroulis will be holding an exhibition at the Church of Holy Apostles, located in Hamilton, that depicts the monks of Mount Athos. 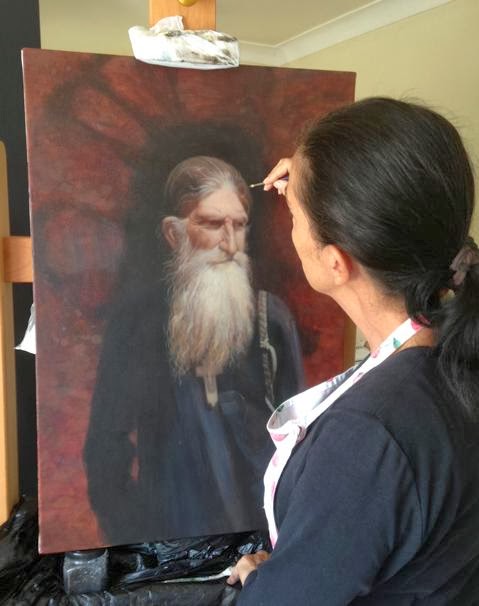 Mount Athos is an independent peninsula in Greece that is home to 20 Eastern Orthodox monasteries.

These monasteries have remained largely unchanged since they were built at the beginning of the 10th century.

Only men over the age of 18 are allowed to visit the territory.

It took a great deal of study and research to create the collection of 18 paintings for the exhibition and Ms Zaunders-Maroulis called it one of her proudest achievements.

“They live a life of humility, simplicity, devotion and dedication,” she said.

“I’ve been going to Greece for years; I’ve always had a fascination with Greece and married into the Greek community.”

Ms Zaunders-Maroulis was a fine arts lecturer at the University of Newcastle for 20 years before leaving to pursue painting and art full time.

“This exhibition is a portrayal of the humanity of individual Athonite Monks,’’ she said.

“The images I have portrayed are life size in scale, making them more accessible to the viewer.

‘‘It is a contemplation and celebration of their existence today.’’

The Exhibition will be Open to the public from Monday 5th May to Saturday 10th of May 2014 at the Church of the Holy Apostles 11-17 Steel Street Hamilton N.S.W