Source: BGN News
The church of Agios Konstantinos in the town of Menemen in Turkey’s western province of İzmir opened on Sunday for its first service in 93 years, with Ecumenical Patriarch Bartholomew I and Menemen mayor Tahir Şahin among the attendees.
Natalya Mihailova | 10 May 2015 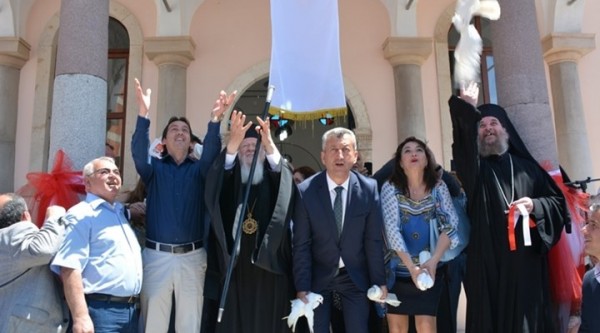 An olive tree was planted on the grounds of the church and doves were released in a symbolic message of peace and unity during the opening ceremony, which was followed by a sermon.

“I greet you all with love, with the belief that this church will add new color to Izmir’s rich culture heritage,” stated the Patriarch Bartholomew I, “I would like to thank you, the people of Menemen. You have overwhelmed me and my friends with emotion, I will never forget these memories for the rest of my life.”

His statements were echoed by Menemen mayor Şahin, who pointed out that the restoration of churches, as well as the construction of mosques and the Alevi cemevis, was an important policy for the Menemen district. “For us what matters is not an individual’s religion, sect or race,” he added, “Humanity comes first, and we need religious institutions where everyone can practice their faith.”

Menemen municipality officials, opposition deputies, representatives of civil society groups and the Greek consul general for İzmir Theodore Tsakiris were among the high-profile attendees. The owners of the architecture firms responsible for the restoration, Umart Mimarlık’s Mahir Kaplan and YD Mimarlık’s Barış Doğan, were awarded with plaques for their work.

The church had been abandoned in 1922 after a population exchange between Greece and Turkey following World War I.