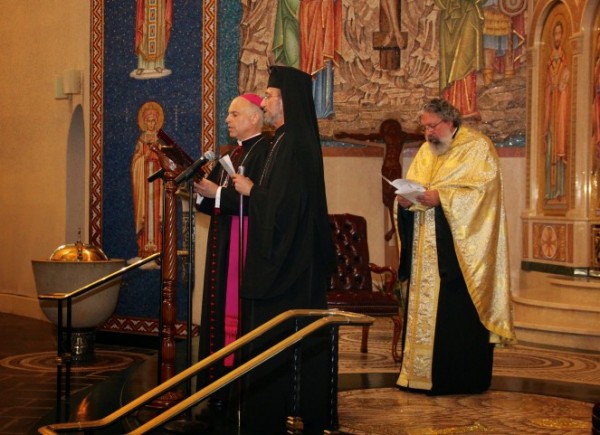 The Greek Orthodox Church of the Holy Cross in Belmont, CA has offered this service since 2007, after they received a relic of the cross on which Jesus Christ was crucified. The faithful of the Holy Cross Church, along with the neighboring parish of the Immaculate Heart of Mary Roman Catholic Church have gathered in prayer annually each year to venerate this blessed relic, calling to mind the ultimate sacrifice of Jesus Christ who died on the cross for our salvation.

Over 500 Greek Orthodox and Roman Catholic faithful, including several clergy from both churches, came together in prayer recognizing the unity of the cross and its central focus during the final week of Great Lent. During the service, the recitation of the Nicene Creed was led jointly by Metropolitan Gerasimos and Archbishop Cordileone, in both Greek and English.

Following the service, His Eminence Metropolitan Gerasimos welcomed His Excellency Archbishop Cordileone, and shared his thoughts on this historic gathering, recalling the journey of His All Holiness Patriarch Athenagoras and His Holiness Pope Paul VI, which still continues today. “Their meeting was a first step to the reconciliation that we are still working toward,” stated Metropolitan Gerasimos. In addressing the forthcoming meeting of the Ecumenical Patriarch and the Pope in Jerusalem, Metropolitan Gerasimos commented this is “not just a celebration of the past, but it presents us with an icon of the future that our two Churches must paint together.”

His Excellency Archbishop Cordileone’s homily to the faithful centered on the theme, “There is No Unity Without the Cross.” In his remarks he stated, “The cross roots us in history: our faith is rooted in actual historical fact. But the Cross is also our hope, and hope orients us toward the future, it opens us up to the horizon of the eternal.”

Following the service, the parish of the Holy Cross offered a reception and an opportunity for fellowship for all the attendees. The young acolytes from the parish presented an icon of The Mystical Supper to Archbishop Cordileone as a remembrance of this occasion. In accepting this gift, Archbishop Cordileone commented that the icon depicts our goal of unity and communion.