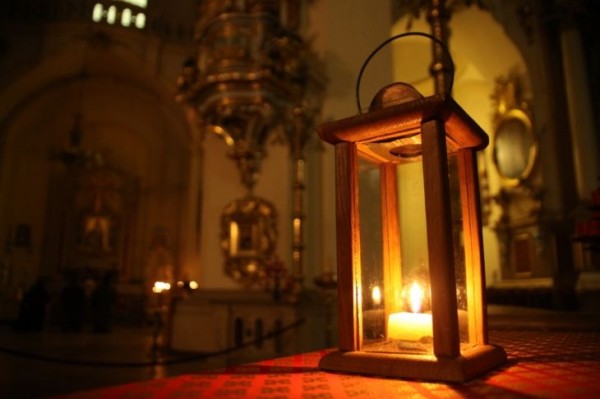 The light lit from the Lampion of the Bethlehem Basilica of the Nativity of Christ has reached the Belarusian border. Representatives of Belarusian youth organizations have brought it to the St. Francis Xavier Cathedral, the main Catholic church of Grodno. The cathedral celebrated the arrival of the Bethlehem light with a solemn mass.

The Grodno catholic youth lit lampads from the Bethlehem light to take them to other parishes of the Grodno Eparchy. Believers will be able to light a candle or a lampad and take the Bethlehem light home. The light will stay there until Christmas. On 7 January Catholic priests pass the Peace Light to Orthodox priests.

The Eparchy explained that the Bethlehem light symbolizes ardent faith, Christian love, and the warmth of Christmas.

The tradition of bringing the Christmas light from Bethlehem to Europe was started by the Austrian ORF TV company from the city of Linz in 1988. Initially it was a charity campaign designed to help children with disabilities, diseased and distressed people, and children living in orphanages and boarding schools. The campaign became popular due to the scouts. The light is delivered to Vienna from Bethlehem by plane in a special container, and then the scouts bring it to other countries, including Belarus, Ukraine, and Russia.

Most viewed articles
Being of One Mind: What It Is and Isn’t147
A Hunger For God’s Presence106
In the Father’s House the Prodigal Son Remains Loved81
Bloom Where You’re Planted68
Patriarch of Serbia Visits the Orthodox Grammar School in Zagreb49
Patriarch Kirill Speaks on the Only Right Path22
Metropolitan Onuphry: Fasting and Prayer Are Two Wings That Help People Draw Near God13
Most popular authors
Archpriest Michael Gillis147
Fr. James Guirguis106
Pravmir.com team84
Metropolitan Hilarion (Alfeyev)81
Fr. Jonathan Tobias70