Source: Pravmir.ru
Natalya Mihailova | 15 November 2014
November 13, 2014. With the blessing of the Most Reverend Onuphrius, Metropolitan of Kiev and All Ukraine, a Service of Intercession took place at the All Holy Warriors Church at the Zhmachenko Street in Kiev. The service preceded the beginning of a peace support mission of the Ukrainian Orthodox Church in the Eastern Ukraine. 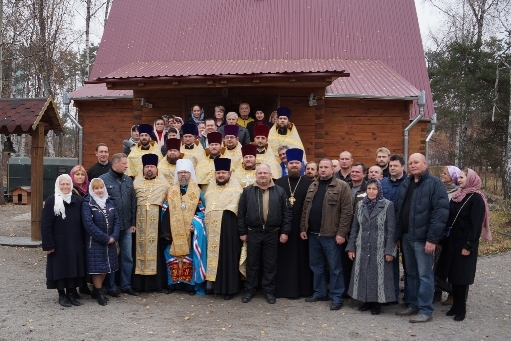 Among the participants in the prayer were Archpriest Sergei Yuschik, Provost of the Kiev Theological Academy and Seminary; Archpriest Ioann Sveredyuk, Rural Dean of the Dneprovsky deanery; Archpriest Vyacheslav Yakovenko, Rector of the All Holy Warriors Church; and clergymen of the Kiev Diocese.

Following the Service of Intercession, the ecclesiastical mission set off. The mission includes the following priests: Fr. Sergei Yuschik, Fr. Vyacheslav Yakovenko, Fr. Sergei Kiselev, Fr. Andrew and Konstantin Dvoroviy, and also a group of veterans of the Afghan war.

Until the end of the week the clergymen will celebrate Services of Intercession before the shrine with the Holy Relics of the Holy Warriors, hold spiritual talks, and distribute icons and spiritual literature to the soldiers.

Most viewed articles
Growing Cold in Faith after a Few Years in Church: Is This Normal?188
How to Survive in Modern City. 8 Essential Conditions129
Russian Church to Help Provide Lebanon with Vaccines Against Coronavirus88
Bishop Irenei Addresses a Symposium on “The Mother of God in Our Lives” in Los Angeles88
It’s All About the Resurrection – Reflecting on the Season85
Over 20 Thousand People Pray for Discrimination of the Ukrainian Orthodox Church60
Vandals Attack Serbian Church in Croatia53
Appeal for Help from the Church of the Mother of God in Austria52
Volunteers from St George Greek Orthodox Church in Rose Bay gather to cook for the homeless47
We’re Being Robbed1
Most popular authors
Pravmir.com team289
Archpriest Nikolai Markovsky188
Fr. Andrei Gavrilenko129
Archpriest Gabriel Rochelle85
Archpriest Georgy Kharlov52
John Voutos47
Archpriest Stephen Freeman1