Source: Associated Press
A single gunman walked into the monastery, entered the garden and shot the priest in the head.
Natalya Mihailova | 09 April 2014
DAMASCUS, Syria — A beloved, elderly Dutch priest who made headlines this year with a desperate plea for aid for civilians trapped in the besieged Syrian city of Homs was assassinated Monday by a masked gunman who shot him at his monastery, the latest attack targeting Christian clergymen in the country’s civil war. 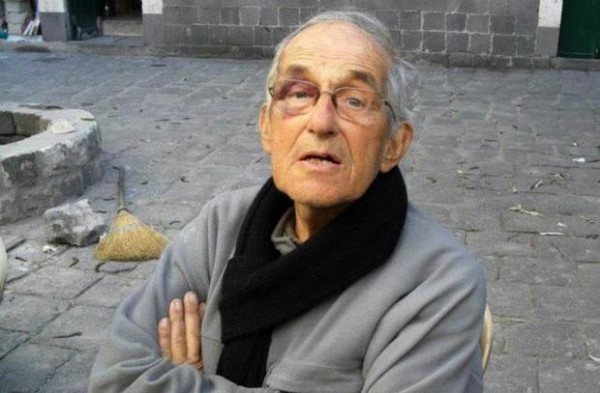 The killing of Father Francis Van Der Lugt — a Jesuit, the same order as Pope Francis — underscored fears among many of Syria’s Christian and Muslim minorities for the fate of their communities as Islamic extremists gain influence among rebels seeking to topple President Bashar Assad.

The 75-year-old Van Der Lugt, an Arabic speaker, had lived in Syria for 50 years and refused to leave Homs even as hundreds of civilians were evacuated from rebel-held districts of Homs that have been besieged for more than a year by Assad’s forces. Van Der Lugt lived in the monastery in one of those neighborhoods, Bustan al-Diwan.

He appeared to have been directly targeted in the early morning attack, according to several people who were in the monastery when the attack occurred. A single gunman walked into the monastery, entered the garden and shot him in the head, said Rev. Ziad Hillal.

“I am truly shocked. A man of peace has been murdered,” Hillal said in a phone interview from Homs with the Vatican Radio.

A person, who has lived in the monastery with the slain priest said he was buried in the convent’s garden late Monday. The person who passed the information of the priest’s burial on the phone did not want to be identified for fear of being targeted.

The motives for the attack were not known, and no one immediately claimed responsibility for the killing.

Over the past year, hard-line rebel groups, including the al-Qaida-linked Nusra Front, have become more influential and dominant among the opposition fighters in the central city, as in many other areas of Syria.

Another Jesuit priest, Father Paolo Dall’Oglio of Italy has been missing since July after traveling to meet Islamic militants who now rule the eastern city of Raqqa. A year ago, two Greek Orthodox bishops were seized from their car by gunmen outside the northern city of Aleppo and have been missing since.

An activist based in the blockaded rebel-held area of Homs said rebel fighters were shocked by the priest’s death.

“The man was living with us, eating with us, sleeping with us. He didn’t leave, even when the blockade was eased,” Beibars Tilawi said via Skype.