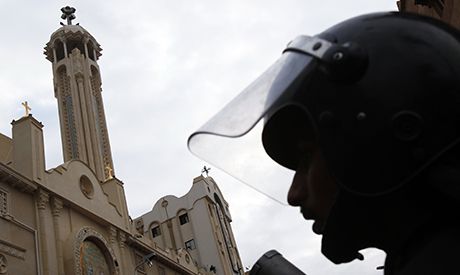 The attack took place in the provincial capital of Minya, about 220 kilometers (135 miles) south of Cairo. The city is home to the nation’s largest Coptic community and the members of the Orthodox minority observe Christmas according to the old, Julian calendar.

Police cordoned off the area shortly after the attack and were searching for the perpetrators, said the security officials, speaking on condition of anonymity because they were not authorized to talk to media.

Egypt has beefed up security around Coptic churches ahead of the Orthodox Christmas. Christians account for some 10 percent of the nation’s 90 million people and have long complained of discrimination by the nation’s Muslim majority.

No one immediately claimed responsibility for the attack but assaults on Christians have stepped up in Egypt since the ouster of Islamist President Mohammed Morsi in July 2013.

A wave of attacks in August 2013 left dozens of churches destroyed, burned or looted, including churches in Minya. Christian homes and businesses were also targeted. The wave of anti-Christian violence followed the breakup by security forces of two sit-in protests by Morsi’s supporters, an operation that killed hundreds.

Egypt’s Christian minority has also complained of a rise in kidnappings, armed robberies and assaults over the past three years, after the country was plunged into turmoil by the 2011 uprising that toppled longtime autocrat Hosni Mubarak.

Security forces have faced a series of deadly militant attacks since Morsi was overthrown.

Islamists claim that Egypt’s Christians played a disproportionately large role in the mass protests that preceded Morsi’s ouster. The Copts, who are mostly members of the Orthodox church, one of Christendom’s oldest, were heavily invested in the anti-Morsi movement in the hope of gaining equal rights with their Muslim compatriots after his removal.