Handover of St. Isaac Cathedral to Orthodox Church may become ‘symbol of reconciliation’

Source: TASS Russian News Agency
The Russian patriarch stressed that after the handover, the admission to the Cathedral would be free
Natalya Mihailova | 18 February 2017
MOSCOW, February 17. /TASS/. The handing over of St. Isaac Cathedral to the Orthodox Church may become a symbol of national reconciliation, head of the Russian Orthodox Church (ROC), Patriarch of Moscow and All Russia Kirill said addressing a meeting of the ROC Supreme Council, held at Moscow’s Christ the Savior Cathedral. 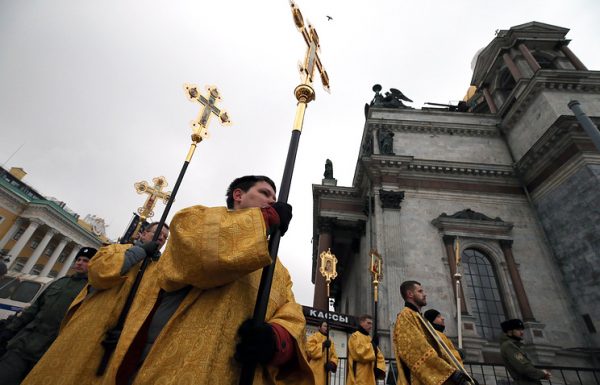 “The handover of St. Isaac Cathedral in St. Petersburg comes in a year that marks the centennial of the Russian Revolution so it may become a symbol of national reconciliation,” the Patriarch said.

“In the past, the destruction of churches and mass killings of believers carved out a horrible chapter in the book of our history and indicated a division in the nation. But now, the peaceful atmosphere surrounding the churches returned to the believers should become a symbol of accord and mutual forgiveness,” Patriarch Kirill added.

He stressed that after the handover, the admission to the Cathedral would be free. According to Patriarch Kirill, the Russian Orthodox Church will be able to carry out all the restoration work in the Cathedral by selling tickets to the Colonnade and arranging paid tours.

In January, St. Petersburg’s municipal authorities announced its decision to hand St. Isaac Cathedral over to the Russian Orthodox Church in accordance with the 2010 law on dispensing religion-related property to religious organizations. However, the building will remain the property of the city of St. Petersburg.

Opponents of this decision filed an appeal, but it was dismissed. A petition initiated on the Internet against the handover was signed by more than 200,000 people. Several rallies were held in St. Petersburg to protest against turning over the Cathedral to the Church, the latest rally, held on January 28, drew about 2,000.

The cathedral was built in 1818-1858 and was transformed into a museum after the 1917 Bolshevik Revolution. Church services were resumed at St. Isaac’s in 1990. The Cathedral is protected by the federal government and it is also on the UNESCO World Heritage Site list.

According to the museum’s authorities, in 2016, about 18,000 people attended services at the St Isaac’s, including the major Christmas service and the special remembrance services for the victims the Russian A-321 jet crash over the Sinai Peninsula. In addition, around 3,900,000 tourists visited the Cathedral during the same period of time.

Most viewed articles
What Does the Cross Mean for us Today?80
Do We Have A Reaction To The Gospel?63
Most popular authors
Priest Robert Miclean80
Fr. James Guirguis63