Source: Diocese of Alaska
Natalya Mihailova | 11 July 2014
The Orthodox Church in America Diocese of Alaska will have the honor of hosting the miraculous Hawaiian Myrrh Streaming Iveron Icon of the Most Holy Theotokos. 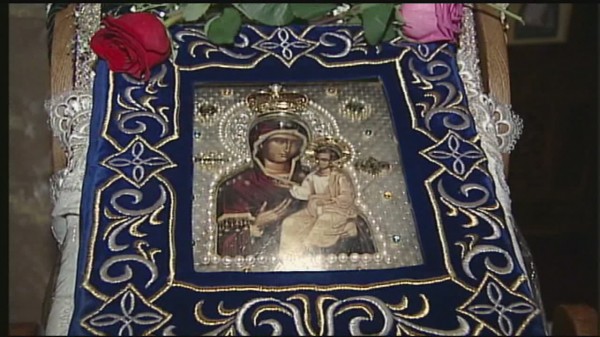 The Holy Icon will make a historic and culturally significant journey to Alaska under the omophor of His Grace David, Bishop of Sitka and Alaska, with the Blessings of His Eminence Kyrill, Archbishop of San Francisco and Western America (ROCOR) to the land where the historic Orthodox Church first began in North America.  The Icon is scheduled to be in Alaska from July 18th through July 30th, starting in Anchorage, then visiting the Kenai Peninsula and Kodiak Island areas.

This holy image, known as a Miracle Working Icon to the Orthodox faithful, is a traditional depiction of the Virgin Mary holding the Christ Child.  The Icon originally belonged to an Orthodox family from Hawaii who noticed that the icon began to miraculously stream myrrh in 2007.  The Myrrh that the icon streams is a sweet smelling liquid that is collected, and distributed to the faithful all over the US. The icon was officially recognized by the Russian Orthodox Church Outside of Russia (ROCOR) as miraculous and worthy of veneration in 2008.  At that time the Holy Icon was given back to the Church and began to travel all of the United States.  Since then the icon has been to over 1000 churches and venerated by an estimated quarter of a million people across the US.  Besides streaming or weeping myrrh, numerous other miracles have been attributed to the Icon of both physical and spiritual nature.

Anyone, regardless of church affiliation, who wishes to pray with the Orthodox Faithful of Alaska is invited to attend one of the Divine Services where the Icon will be present while it is in Alaska.  For more information, or for a request for prayer with the Icon, please call the Chancery Office of the Orthodox Diocese of Sitka and Alaska at:

Most viewed articles
The Eros of Marriage228
Patriarch Kirill Urges Women Not to Have an Abortion227
Does It Matter if Jesus is God or Not?106
Good News from His Eminence Metropolitan Joseph72
Metropolitan Kirill of Kazan Visits Children Injured in the Attack on the Gymnasium59
Moleben for Peace in the Holy Land to Be Held Tomorrow in Moscow55
The Emigration of Abraham50
Most popular authors
Pravmir.com team341
Fr. Vasile Tudora228
Archpriest John Moses (+2019)106
Archbishop Joseph of New York and Metropolitan of All North America72
Archpriest Lawrence Farley50