Source: The Middle East Monitor
Natalya Mihailova | 26 November 2015
The leader of Egypt’s Coptic Church, Pope Tawadros II of Alexandria, will lead a church delegation in a rare visit to Jerusalem on Saturday. This will be the first such visit in 35 years, the Coptic Orthodox Church said in a statement. 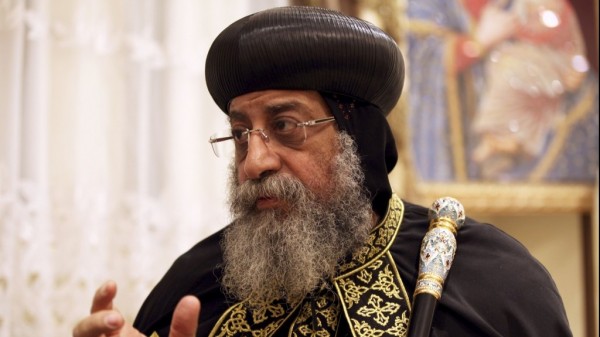 According to church spokesman Paul Halim, “Pope Tawadros II of Alexandria will attend the funeral and pray for the Coptic Orthodox Archbishop of Jerusalem and the Near East, His Eminence Dr Anba Abraham, who died on Wednesday.”

The high profile visit is being made despite the church’s firm position not to visit Jerusalem without a solution to the Palestinian cause. This, explained Halim, is because the late archbishop of Jerusalem was second in importance after Pope Tawadros in the Holy Synod of Bishops, the supreme canonical authority of the Coptic Church. The Holy Synod banned visits to Jerusalem on 26 March, 1980 following the Camp David Accords between Egypt and Israel.

Palestinian Authority President Mahmoud Abbas met Pope Tawadros II earlier this month at the papal residence in the Cathedral of Saint Mark in Cairo’s Abbassiya district. The Coptic pope was reported to have told Abbas that the Palestinian cause is “the top” Arab priority. “Dialogue is the best way to reach a solution for the Palestinian cause,” he added.

The Palestinian leader invited the pope to visit Jerusalem, which he said would be “a big step in support of the Palestinian people, as such visits are always for the prisoners [the Palestinians], not for the wardens [the Israelis].”