Source: DECR
Natalya Mihailova | 06 November 2015
On 4 November 2015, the feast day of the Kazan icon of the Mother of God and the Day of National Unity, President Vladimir Putin of the Russian Federation and His Holiness Patriarch Kirill of Moscow and All Russia led the opening of the 14th Public Forum and Exhibition this year called ‘Orthodox Russia. My History. From Great Upheavals to the Great Victory’ organized by the Patriarchal Council for Culture with support of the Moscow City Government. 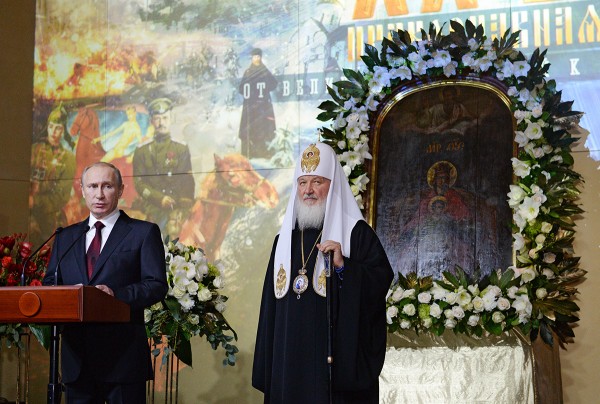 The ‘She Who Reigns’ icon of the Mother of God has been brought to Manezh from the church of the Kazan icon in Kolomenskoye. The head of the state and the Primate of the Russian Orthodox Church put candles at the miraculous icon and venerated it. President Putin addressed those gathered at the opening, saying: ‘Your Holiness, dear friends, I congratulate you on the opening of the annual exhibition in the Orthodox Russia cycle, timed to commemorate the Day of National Unity.

‘This educational project is the result of a big joint effort by the Russian Orthodox Church and leading research organizations, archives and libraries, and is evidence of the growing deep and real interest in Russia’s history and in our spiritual roots and origins. I want to thank sincerely the organizers and participants for their work. 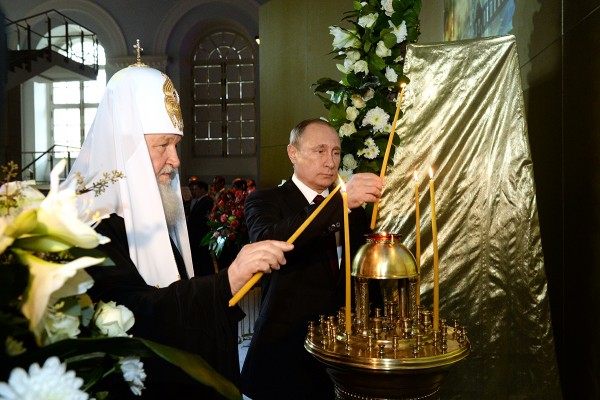 ‘This extensive exhibition’s central theme is the period from 1914 to 1945, a time of World Wars, revolutions and upheavals. It was the time when old foundations shattered, destinies crumbled and millions of people became the victims of cruel social experiments.

‘But even in those hard and difficult conditions people lived, created, made discoveries and achieved breakthroughs, always remembering what was most important when our homeland was in danger. They understood the importance of unity and drew strength from, eternal values and lofty moral ideals. Ideological stereotypes faded before the real historical Russia.

‘Love for the Motherland was the strongest and all-vanquishing emotion. It inspired, helped and saved. This was how our people came through the 1941–1945 Great Patriotic War and not just survived, but preserved and strengthened our statehood and brought peace and liberation to the enslaved peoples of Europe. 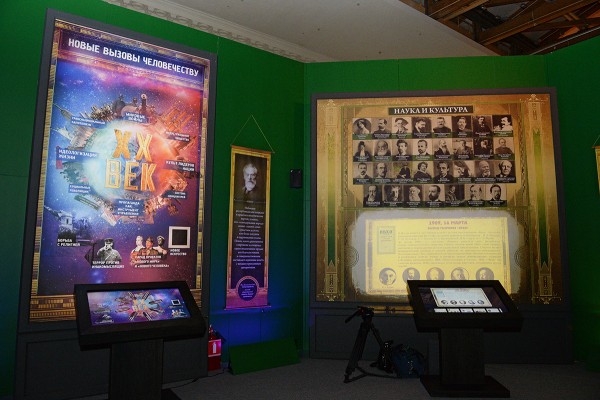 ‘This year we celebrated our big national holiday – the 70th anniversary of the Great Victory, which was an event of tremendous historical and moral importance, a source of unquestionable pride and respect, and the symbol of our people’s heroism. This is our history, and it is our duty to know this history, respect it in full and without passing anything over in silence, to learn and remember its lessons, and respect and value this past experience.

‘I am confident that this exhibition, based on authentic evidence and documents with the use of the latest technology, will be interesting to people of all generations and ages, including young people. This is all the more true as the exhibition will take place not just here in the capital, but in other Russian cities, too.

‘It is important that visitors and guests will have a chance to take a new look at the well-known events and facts and form their own views and impressions. Once again, I congratulate you on the opening of this exhibition and wish you success and all the very best.

His Holiness Patriarch Kirill of Moscow and All Russia cordially greeted those gathered with the remarkable event saying:

‘A miraculous icon of the Mother of God called ‘She Who Reigns’, which you see in the centre of the exhibition hall, has a special place in history. It was found in the cellar of the church in the village of Kolomenskoye, now a part of Moscow, on the day of Emperor Nicholas II’ abdication. The best minds of Russia took the finding of the icon as a God’s sign. The tsar had gone, but the Mother of God took over the leadership of the country and has always interceded for it. We have experienced suffering, grief and trials, but have remained a great and strong country with our own identity, which we have not lost, while other countries on the European continent are losing their identity. We believe in the intercession of the Mother of God and say to all domestic and foreign adversaries of Russia: ‘”Leave us alone! The intercession of the Mother of God is with us!

‘The exhibition is dedicated to the difficult time in the history of our country. We all know about the disorder during the years after the Revolution and the clash of class, social, political and economic interests, about attempts to ruin the country.

A lot of blood was shed, and millions of people were ousted from the country. We know that the 30s were also difficult because of a lot of injustice and wrongdoings, and we should never forget it. Yet, there would not be modern Russia without the exploit of the generations before us who founded industry, science and defensive power of the country. We should not doubt successes of a state leader, who stood at the origins of the revival and modernization of the country, even if he committed crimes.

Where there were will, strength, intellect, political resolve, we call it resounding success as in the case of the Victory in the Great Patriotic War, while where there were blood, injustice and sufferings, we say that it is unacceptable for us, people of the 21st century.

‘I do hope that the exhibition would help us comprehend the glory of our people’s heroism in the 20s, 30s and 40s and see the hardships and understand that in order to love our Motherland we should not exclude any historical period from the historical memory, but take it with common sense and clear moral perception. Then truth will be separated from lies, and the good from the evil. May the Lord help our Fatherland to concentrate, to overcome the hardships of the past and go ahead. Today we have all opportunities to do it.

‘I would like to cordially greet you, highly respected Vladimir Vladimirovich and thank you for taking part in the opening of this exhibition. We pray now as at every divine service: May God’s blessing be with the Russian state, the authorities, the army and the entire nation.’ 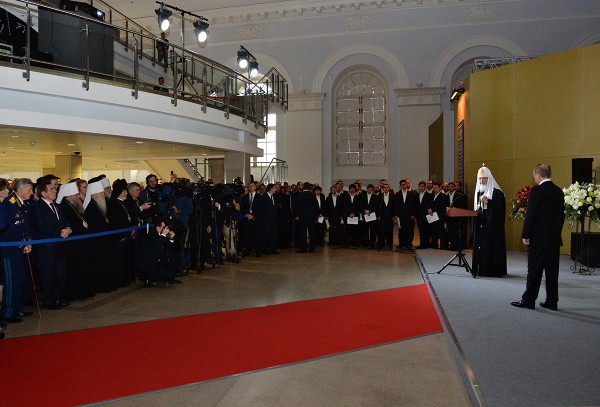 After seeing the exhibition, President Putin and His Holiness Patriarch Kirill signed the book of honorary guests.

Among those attending the ceremony were chief of the Presidential Administration Sergei Ivanov; Moscow Mayor Sergei Sobyanin; Minister of Culture Vladimir Medinsky; Metropolitan Juvenaly of Krutitsy and Kolomna; Metropolitan Varsonofy of St.Petersburg and Ladoga, chancellor of the Moscow Patriarchate; Metropolitan Hilarion of Volokolamsk, chairman of the Department for External Church Relations; and Metropolitan Arseny of Istra, first Patriarchal vicar.