Source: ROCOR
Natalya Mihailova | 26 June 2014
On Tuesday, June 24, 2014 , after Divine Liturgy was celebrated at the Cathedral of the Mother of God “Joy of All Who Sorrow” in San Francisco, His Eminence Metropolitan Hilarion of Eastern America and New York, First Hierarch and the hierarchs of the Russian Orthodox Church Outside of Russia headed for the former residence of St John of Shanghai and San Francisco (Maximovich, +1966) the Miracle-worker, which became the headquarters of the Western American Diocese after his repose. 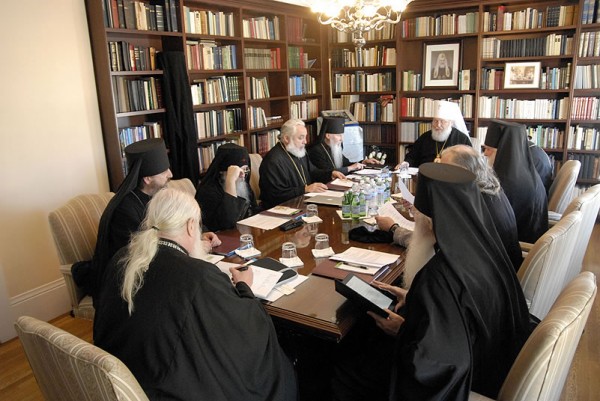 Having prayed at a moleben service in St Tikhon of Zadonsk Chapel on the first floor, and venerating St John’s relics in his old monastic cell, the archpastors gathered in the library of Archbishop Anthony (Medvedev, +2000), who ruled the diocese for 32 years. Vladyka Anthony left fond memories in the hearts of many clergymen and laypersons. Metropolitan Hilarion then opened the Council of Bishops meeting by welcoming the hierarchs, wishing them wisdom and heavenly aid in their work.

The sessions will have the Kursk-Root Icon of the Mother of God “of the Sign” in attendance, brought from Munich to San Franciso by His Eminence Archbishop Mark of Berlin and Germany.

Materials from the Council will be posted as they are released.

Most viewed articles
Hierarch from North Macedonia Gives Advice to the Ukrainian Orthodox Church106
Patriarch Kirill: We In No Way Question the Healing Power of the Holy Mysteries of Christ!104
Participating in God’s Vision91
Lessons from Saint Mary of Egypt87
Ethiopian Patriarch Thanks Patriarch Kirill For the Support During the Persecution78
Patriarch Kirill: Faith in the Lord Gives Us the Ability to Distinguish Between Good and Evil61
On Feeling Forsaken40
Representative of Russian Patriarch Delivers Rehabilitation Facilities to Children in Syria35
Maronite Patriarch Thanks Russian Patriarch for His Support for Christians in the Middle East21
Sunday of the Samaritan Woman4
Most popular authors
Pravmir.com team405
Priest Dustin Lyon91
Justin Doty87
Archpriest John Moses (+2019)40