It happens that even childhood purity does not save one from the invasion on an evil spirit, and a demon inhabits the soul of a child. Such was the case with the youth about whom we heard in today’s Gospel reading.
Metropolitan Vladimir (Ikim) of Omsk and Tarsk | 09 August 2015 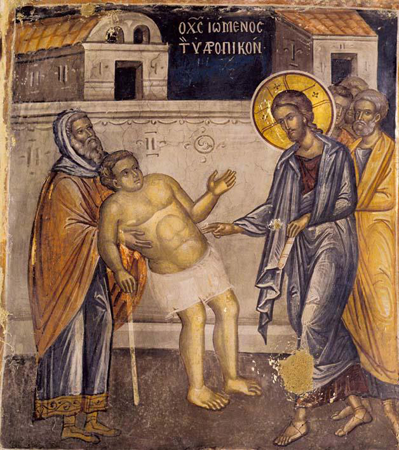 Howbeit this kind goeth not out but by prayer and fasting (Matthew 17:21). 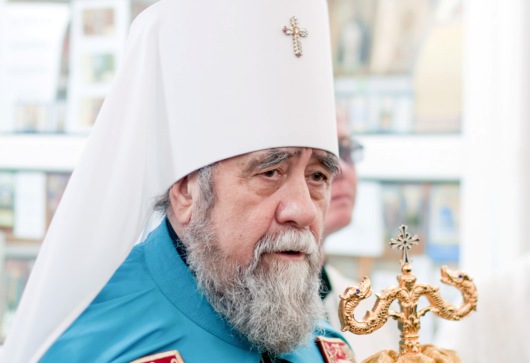 Dear in Christ, brothers and sisters!

The fall into sin of the first people made the human soul accessible to penetration by dark and hostile forces. If the Lord had given us inner vision, we would all be horrified to see what a tangle of hideous serpents nests in our hearts. If man either does not want to or is not able to struggle against his spiritual impurity, then sooner or later he will become a plaything of evil spirits, a pathetic slave of passions and vices. Sometimes the demon that rules over such a person visibly taunts him, forcing him to indulge in wild and monstrous conduct. Such a condition is called affliction or demon possession, deliverance from which is associated with great difficulties.

It happens that even childhood purity does not save one from the invasion on an evil spirit, and a demon inhabits the soul of a child. This takes place “according to the sins of the parents,” when the child grows from his earliest years in an atmosphere of faithlessness and cynicism, seeing the moral impurity of his elders. Such was the case with the youth about whom we heard in today’s Gospel reading, who was demon possessed and suffered grievously, throwing himself into fire and water (cf. Matthew 17:15).

The father of the unfortunate adolescent was of little faith – one of those for whom every phenomenon that violates the usual order of things seems impossible. He brought his son to the Apostles, and then to the Savior as well, only to clear his conscience, so that he would have the right to say ruefully to himself: “See, I’ve done everything for my son that I could; I even brought him to miracle workers, but even they couldn’t help.” What a rational chill emanates from his appeal to Jesus: If Thou canst do any thing… help us (Mark 9:22). And to Whom does he say this “if you can do this”? To the very Son of God, the Lord Almighty.

Why were the Apostles, who had already received from the Savior the gift of wonderworking, not able to heal the demon-possessed youth? It was not even the case that the demon that dwelt in him was strong. Miracles of healing are composed of two comingling streams: Divine grace and the aspiration for it by the fervent faith of the afflicted one himself or his neighbors. But the Apostles, trying to heal the youth, ran into a wall of faithlessness. The adolescent himself could not believe, for he was entirely under the power of the evil spirit; nor did the unfortunate father believe. Fenced about with this unbelief like a fortress, the demon mocked the efforts of the Apostles, whose own faith was not yet perfect.

The Savior Himself came to destroy the stronghold of the demons. The string which the Lord Jesus plucked in the unbelieving father was parental love. In a word, “all things are possible to him that believeth” (Mark 9:23). The Lord made it clear to this man that only from him, from his ability to believe, depends whether the son will be freed from suffering. His hardened heart trembling, the father exclaimed: “I believe; help Thou mine unbelief” (Mark 9:24). This outburst was enough: Jesus Christ drove from the youth the unclear spirit that was tormenting him.

The spirits of malice prowl about everywhere, seeking entrance into men’s souls in order enslave them. The insidious demons disguise themselves in varied ways; they not only seek out our weaknesses, but also adapt to the time in which they are active.

For long decades our Fatherland was covertly dominated by the demons of militant atheism. Now they have grown weak. The Church has received the opportunity freely to raise its voice for preaching the word of God. But does that mean that the danger has passed, that the people have been saved? Alas, no. The people, leaving the abyss of spiritual impoverishment, the devil now strives to push into the abyss of permissiveness.

Those who can see beyond the external to the innermost essence, see that our modernity is the scene of an open battle between the forces of light and the demonic hordes. A battle is underway for our younger generation, for our children. Into their gentle, fledgling consciousness is being poured a muddy stream of movies and television, photographs and pictures, and articles and books that advocate violence, fornication, profiteering, and the “sweet life.”

What can we say about those journalists and directors, artists and writers, who for the sake of money or for their own depravity become minions in this demonic coven? Holy Scripture states: “woe to that man by whom the offences cometh!” But alas, woe also to him who falls for these offences.

It is frightful, my beloved brothers and sisters, it is frightful for the children. Every obscene spectacle that a child witnesses cuts through the breach of the protective shell of a young soul, and even the grace of Holy Baptism might not save him from the introduction of the demonic. Phony excuses like “the kids don’t understand” is the picture of sin in which poisonous seeds fall into the subconscious and bring forth sometimes terrible sprouts.

Beloved brothers and sisters in the Lord!

By faith and love we can save both ourselves, and our neighbors, and our entire nation. But, setting out on the ascetic labor of Christian activity, we should all first of all drive out the evil spirits from our own souls, for each one of us has been exposed to a kind of demonic possession.

What is obsessiveness, if not servitude to the demons? Is not someone who cannot go a single day without meat a slave to the demon of gluttony? Is not someone who cannot restrain his tongue from judging others not a servant of the demon of slander? And in what abominable captivity are people kept by the vicious demon of fornication and the rapacious demon of drunkenness? What animal appearance does the predatory demon of anger give us? And how much more hellish spawn lies hidden in the depths of our souls?

We come to Church, but we persistently drag along our own passions and lusts. Often they are already so long-standing, they have so grown together with us, that ridding ourselves of them seems impossible. But concerning the most hardened, most deeply-rooted demons, the Savior said: “Howbeit this kind goeth not out but by prayer and fasting” (Matthew 17:21).

Prayer and fasting! Fasting and prayer! St. John Chrysostom called them the two wings of faith. With these wings we can rise up and cast off the evil spirits that cling to us.

In abstinence from heavy and fatty food, in bodily fasting is hidden a profound spiritual meaning. The body, satiated with food, begins to demand other appeasements: hence laziness, drowsiness, and various desires. “How every much you take away from the body, the more you give to the powers of the soul,” said St. Basil the Great. Abstinence in small things strengthens man’s will, making him capable of greater achievements. The notion of fasting is not limited to abstention from food – fasting is all-embracing.

Prayer lightens the very soul of man, filling it with the holy joy of communion with God. The name of our Lord Jesus Christ alone strikes fear in the demons; they run from warm prayer, as a kind of all-conquering weapon. Ceaseless prayerful labor is the key to our liberation from the humiliating slavery to the vices; it is the trail that leads to the Heavenly Father’s Kingdom. “Sometimes one begins to pray as a sinner, and end as a righteous one,” said the Blessed Augustine.

The swarms of evil spirits do not frighten one who worthily struggles in fasting and prayer. Yea, let us become good soldiers of Christ, according to the words of the Apostle Paul: “Put on the whole armour of God, that ye may be able to stand against the wiles of the devil” (Ephesians 6:11). Amen.

“The seed of Jezebel is still alive; Herodias is still raging. She is dancing, demanding the head of…