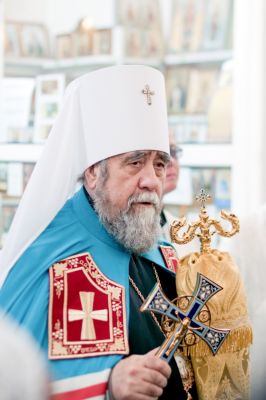 “The seed of Jezebel is still alive; Herodias is still raging. She is dancing, demanding the head of John. Everything is hastening towards impiety.” – St. John Chrysostom.

Man’s head is the abode of his mind.

A darkened intellect ruins its own house: in mockery of the impious, all that remains of them on earth are their skulls with bared teeth. But the head of a righteous man, enlightened by Divine wisdom, can be miraculously transformed. Thus has the precious head of St. John the Baptist shone forth for centuries, streaming healing myrrh, in the glory of incorruption.

The head of the Lord’s Forerunner can be likened to a rational luminary: a star that at times has shone over the world and at times has hidden itself, not wanting to see human madness.

As long as pagan Rome raged, shedding the blood of Christians, the Forerunner’s head rested in the depths of the earth. But then the Emperor Constantine, Equal to the Apostles, freed the Church and the light of Christ’s Reason shone freely upon mankind. It was then that the first finding of the divinely-wise head of John the Baptist took place.

But Satan was wide awake, inducing the vainglorious sophists of this world to distort Divine Truths. One mad and impious heresy after another was ignited. The Forerunner’s precious head, as if escaping from the hands of the Arian heretics, once again hid in the depths of the earth. It hid from people while the warriors of Christ were fighting against the distorters of the holy faith. Thus, the falsehood of Arius and his followers was exposed, while at the Fourth Ecumenical Council in Chalcedon another extremely dangerous heresy was defeated, that of Nestorianism. A year later, in 452, the precious head of the Lord’s Forerunner again appeared to the Christian world.

This great sacred object became the treasure of the Syrian city of Emesa. When Syria became part of the Islamic Caliphate, the Forerunner’s head was transferred to Constantinople. But even this royal city, called to be the capital city of Christianity, had inclined towards iniquity more than once. The temptation of absolute power and the stench of court flattery had darkened the minds of the Byzantine Emperors. The court circles were being infected with luxury, debauchery, and cruelty; and new madness began to flow from this “rotting head of the Empire.” Thus, at the beginning of the eighth century, yet another wicked heresy arose: iconoclasm.

What were the heretics raising their hands against by declaring that the holy icons of Christ were idols? In Holy Scripture it is stated: No man hath seen God at any time: the only begotten Son, which is in the bosom of the Father, He hath declared Him (John 1:18). Indeed! The unfathomable God appeared in human form. People could see the Incarnate Son of God with their earthly eyes. This was a visible manifestation of the Invisible All-Perfect One. The iconoclasts tried to erase the human image of Christ the Savior from memory. Blasphemy against the Incarnate Divinity – this was the heresy’s essence.

For the herald of Christ’s coming, St. John the Baptist, could anything have been more loathsome than the falsehood of iconoclasm?

Repent ye: for the kingdom of heaven is at hand (Matthew 3:2), cried out the Lord’s Forerunner. Just that: at hand! The Heaving King Himself stood beside people, was among them, and ate and drank with publicans and sinners (cf. Matthew 9:11). God was made Man in order to save the fallen. The Creator and King of the Universe became close to us. But the iconoclasts labored to cast aside the Heavenly Kingdom that Christ had brought to earth. The prohibition of the holy icons was a negation of the Son of God’s Humanity, which is what renders Him accessible to our senses, especially to our sense of love. The heretics wanted to return us to the dusk of the Old Testament, when mankind was inconceivably far from the Almighty. Behind their call for purity of faith lurked coldness and emptiness; in our times, this barrenness gapes from the naked walls of Protestant houses of worship. 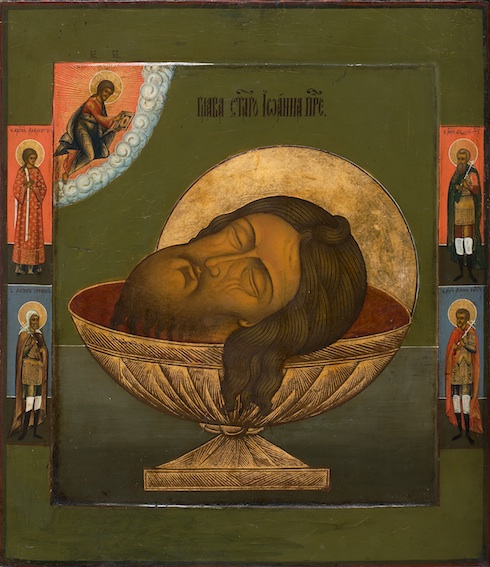 O generation of vipers, who hath warned you to flee from the wrath to come? (Matthew 3:7) – thus did St. John the Baptist revoke the scribes and Pharisees. These whitewashed tombs clung to the dead letter, rejecting the live-giving spirit of Holy Scripture. These latest Pharisees, the iconoclasts with their cry of “Thou shalt not make unto thee any graven image,” puffed themselves up to be more righteous than the ancient God-seer, Moses, to whom the Lord had given this commandment. The Prophet Moses placed images of cherubim in the Tabernacle of the Covenant in adornment of this shrine of the true God. The iconoclasts showed themselves to be “more Judaizing” than the Jews of the Old Testament: after all, there were gold statues of angels in the Temple of Jerusalem. These were images of invisible heavenly spirits. The iconoclasts even rose up against depictions of the visible image of the Lord Jesus and the figures of the Lord’s holy saints. It is obvious that the commandment against making graven images concerned the worship of false gods. The iconoclasts blasphemed against and destroyed holy things that served for the veneration of the True Lord.

And I saw, and bore record that this is the Son of God (John 1:34), says St. John about Christ Jesus. During the Lord’s Baptism the Baptist was vouchsafed to see the heavens opened. For the faithful, it is the holy icons that remain as windows into the Kingdom of God, as clearly shown by the multitude of miracles emanating from sacred images. Yet the manifestation of God’s Spirit through miraculous icons did nothing to convince the crooked minds of the iconoclasts. The heretics were eager to close the holy windows to Heaven from our sight.

The Lord’s Forerunner had his raiment of camel’s hair, and a leathern girdle about his loins, and his meat was locusts and wild honey (Matthew 3:4). He renounced worldly goods and wandered in the desert for the sake of his great love for the Almighty, so that nothing would separate him from this sacred love. In the same way, Christians seeking perfection have renounced the vanity of the world and embraced monasticism. It was the monks who came to the defense of the holy icons more zealously than others. The iconoclasts introduced the satanic custom of dashing the heads of monks onto the very icons that they venerated. Thus did Christian monks receive the crown of martyrdom from the hands of heretics, following the Baptist in his great love of God.

Generation of vipers (that is, offspring of snakes) is what Christ’s Forerunner called not only the Pharisees, but also the Sadducees – those ancient profaners who did not believe in the resurrection of the dead. The iconoclasts were like the Sadducees in that they rejected not only the holy icons, but also the sacred relics of God’s saints. Sacred relics could hardly have been called idols: they were not made by hands. The incorrupt bodies of the Lord’s righteous ones revealed a harbinger of the Heavenly glory prepared for the faithful.

But the God-hating iconoclasts spit upon the holy relics, cast them into swamps, and burnt them at the stake. They acted just like the mad Herodias, who committed an outrage against the severed head of St. John the Baptist.

When the heresy of iconoclasm broke out, the precious head of the Lord’s Forerunner disappeared from Constantinople.

This great sacred object was carried away by the faithful who were fleeing persecution by the iconoclasts. By Divine Providence, the Forerunner’s head found itself in Comana, a small village of no worldly repute, but dear to Christian hearts. It was in this small village that another divinely-wise ascetic struggler with the name of John completed his earthly path: St. John Chrysostom. A teacher of the Universal Church, driven repeatedly into exile, he reposed with the words: “Glory to God for everything!” A little more than three centuries after his repose, the Forerunner’s precious head was brought to Comana. It was as if St. John the Baptist had followed St. John Chrysostom into exile. The Forerunner’s head was placed in a silver vessel and again went into hiding in the earth – until the Triumph of Orthodoxy.

St. John Chrysostom had been cast out for his denunciation of the luxury, licentiousness, and anti-Christian customs of the imperial court. Lurking within the wickedness of the Caesars of the Christian Empire were the germs of future calamities for the Church. St. John Chrysostom warned: “The seed of Jezebel is still alive; Herodias is still raging.” Thus was the malice of the ancient profaners revived with particular clarity in the iconoclast Emperors.

It happens that even childhood purity does not save one from the invasion on an evil spirit, and…