Source: DECR
Natalya Mihailova | 23 July 2014
On 18 July 2014, Hegumen Arseniy (Sokolov), representative of the Patriarch of Moscow and All Russia to the Patriarch of Antioch and All the East, celebrated a prayer service at the Embassy of the Russian Federation in Damascus. 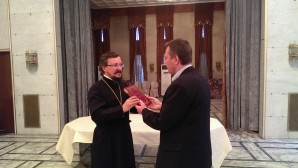 The district, in which the Embassy is located, came under mortar fire the day before. As a result, four citizens of the Syrian capital were killed.

Among those present at the prayer service were Mr. Vladimir Zheltov, Russian Chargé d’Affaires in Syria, and members of a delegation of the State Duma of the Russian Federation, who had come to Damascus to arrange a holiday of the Syrian orphans in Russia.

After the prayer service, Hegumen Arseniy expressed his support to staff members of the Embassy and presented them with the New Testament, published by the Moscow Patriarchate.