Source: DECR
Natalya Mihailova | 25 July 2017
Support for the canonical Ukrainian Orthodox Church and its Primate, His Beatitude Onufry, Metropolitan of Kiev and All Ukraine, has been expressed by representatives of Local Orthodox Churches who came on July 23, 2017, to Kiev to honour in prayer the memory of St. Anthony of the Caves, the founder of monasticism in Rus’. 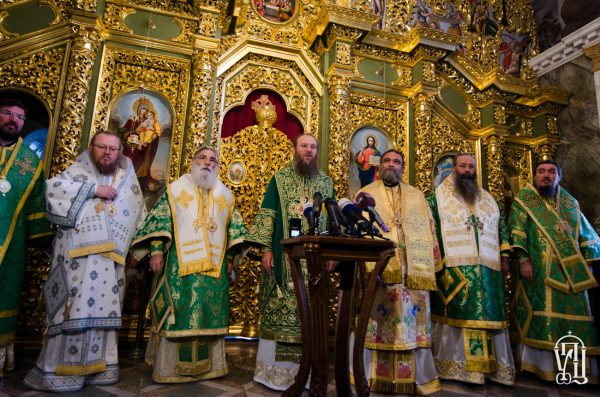 Metropolitan Naum of Rousse (Bulgarian Orthodox Church) said that in its time the Bulgarian Church experienced a schism too, but with prayer and God’s help it was overcome:

The Church is one in Christ; it is the body of Christ, and all its members are inseparably connected with Christ, reminded Metropolitan Isaiah of Tamassos and Orinis (Orthodox Church of Cyprus).

‘I should say: those who are in union and unity with the Ukrainian Orthodox Church are in union with us too. It is the only canonical Church in Ukraine’.

Support for the Ukrainian Orthodox Church and its Primate was also expressed by Archbishop George of Wroclaw and Szczecin (Polish Orthodox Church): ‘I would like to call everybody to intensify their prayers for the unity of holy Orthodoxy so that the Lord may grant much strength, spiritual support and grace to His Beatitude Metropolitan Onufry and all the episcopate and that they may steadfastly preserve the canonicity of holy Orthodoxy followed by the grace of the Holy Spirit, without which there is no Church’.

The hierarchs from other countries also extended congratulations to the chancellor of the Ukrainian Orthodox Church, Metropolitan Anthony of Borispol and Brovary, on his name day and his coming 50th birthday, reports the UOC information and education department.