Source: ROCOR
Natalya Mihailova | 02 February 2016
On February 1, 2016, the seventh anniversary of the enthronement of His Holiness Patriarch Kirill of Moscow and All Russia, Divine Liturgy was celebrated at Christ the Savior Cathedral in Moscow. His Holiness officiated wearing the vestments he wore during his enthronement. 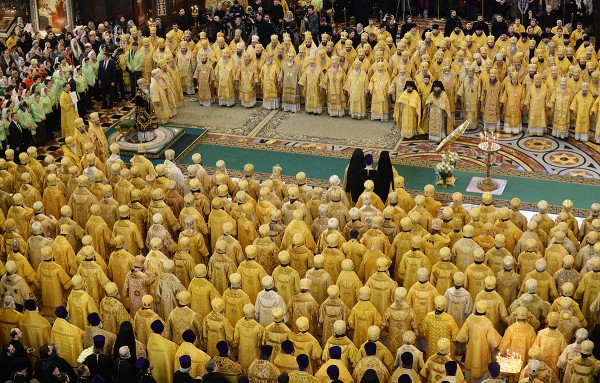 Singing at the service were the choir of Christ the Savior Cathedral under the direction of IB Tolkachev and the world-renowned Sretensky Monastery Choir under NS Zhila.

During the augmented litany, special supplications were made for His Holiness. Afterwards, Patriarch Kirill lifted up a special prayer for peace in Ukraine.

The television channel Soyuz offered a live broadcast of the Liturgy.

After Liturgy, a moleben of gratitude was performed.

His Beatitude Metropolitan Onouphry of Kiev and All Ukraine then read a congratulatory address to His Holiness on behalf of the members of the Holy Synod of Bishops of the Russian Orthodox Church, after which he gave Patriarch Kirill an painted icon of the Mother of God of Kazan, a patriarchal paramandyas and a bouquet of flowers.

The Plenipotentiary Representative of Russian President Vladimir Putin, AD Beglov, congratulated His Holiness on behalf of the nation’s leader. The Patriarch then delivered a sermon, after which he gave ecclesiastical awards to archpastors and pastors in honor of important anniversaries in their service.

To mark the 35th anniversary of his archpastoral service, His Holiness awarded His Eminence Archbishop Mark of Berlin and Germany the Medal of St Innokenty, Metropolitan of Moscow and Kolomensk, Second Degree.

On February 2, 2016, Christ the Savior Cathedral will host the Council of Bishops under the chairmanship of Hils Holiness Patriarch Kirill.

For a full Russian-language report, visit the Press Service of the Patriarch of Moscow and All Russia.