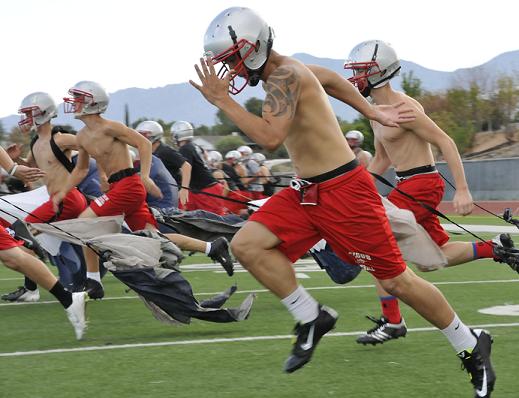 Where I live in West Texas, there is no shortage of asceticism, especially during the terribly hot month of August.  That’s when high school football players and band members spend several hours each day practicing in the blazing sun.  Members of the tennis team, cheerleaders, and other athletes do the same.  They want to become better at what they do, so they accept a good measure of discomfort without much complaint as their seasons begin.  The same is true of fans who drive hours in the wide open spaces out here to cheer on their teams as they sit in temperatures near the 100 degree mark even as the sun goes down.

It’s interesting that our society more readily accepts discipline and sacrifice for sports than for religion.  Even a moderate form of Orthodox fasting, for example, seems shockingly difficult to many people.  (“No meat or dairy?  You’ve got to be kidding!”) The length of our services, the practice of standing for at least much of them, and the other spiritual disciplines of Orthodoxy seem to ask more  than many are willing to give. How ironic, then, that fans joyfully embrace driving a few hours each way to a game and sitting in the elements on uncomfortable bleachers for hours.  They’ll gladly sweat in August and freeze in December, if their teams make it that far in the play offs.   And athletes, band members, and others sacrifice much more time, energy, and comfort on a regular basis in their practice sessions.

There’s nothing wrong, of course, with people reorienting their schedules, and overcoming their laziness, in order to excel in athletics, music, or other activities.  The benefits of such self-control may strengthen us physically, morally, and even spiritually. Any honest endeavor that gives us practice in putting aside self-centered inclinations for the pursuit of a higher good is probably good for us.  Nonetheless, it is easy for such endeavors simply to serve human glory and to be exercises in wedding ourselves even more closely to pride, the praise of others, and the perverse joy of building ourselves up by putting others down.  It’s chilling to think of how alluring we find it to identify ourselves with a group—whether a team, a race, or a political party—that demonstrates its superiority by crushing an opponent.  Competition isn’t evil in and of itself, but our passions so easily get the better of us.  Too often, the passing thrill of winning isn’t the most important thing, it’s the only thing.

As St. Paul wrote, “Every athlete exercises self-control in all things.  They do it to receive a perishable wreath, but we an imperishable.  I do not box as one beating aimlessly, but I pommel my body and subdue it, lest after preaching to others I myself should be disqualified.” (1 Cor. 9:25-27) Orthodox Christians do not deny themselves in order to clobber other people, hear the applause of the crowds, and proclaim that we’re number one.  We do, however, struggle to achieve victory over ourselves, especially our obsessions with getting our own way, satisfying whatever self-centered inclinations we have at the moment, and  treating other people and creation itself as though they existed simply to serve us.  If we do not cooperate with the Lord by doing what we can to turn away from such habitual sins, we will not have the spiritual strength to love and serve God and neighbor.  Instead, we will remain in the default position of corrupt humanity by worshiping only ourselves.

Athletes typically do not sweat and toil under the authority of coaches merely because they enjoy physical exertion or being told what to do.  Instead, they devote themselves to achieving a goal that may be reached only by accepting a certain kind of discipline.  If they work so hard for what is here today and gone tomorrow, all the more should Orthodox Christians accept another kind of discipline that enables us to “run with perseverance the race that is set before us” (Heb. 12:1) as we “press on toward the goal for the prize of the upward call of God in Christ Jesus.” (Phil. 3:14)  Yes, it requires dedication and self-denial to practice the spiritual disciplines of the Church on a regular basis.  Prayer, forgiveness, fasting, and generosity to the needy, for example, do not come easily to us.  But if we will undertake them as best we can with a humble prayer for the Lord’s mercy, we will find new strength for the journey. That won’t be because we have accomplished something by our own power, but because we will have opened our lives to the One who enables us to run without becoming weary and to walk without growing faint.  (Isa. 40:31)

So the next time you see athletes denying themselves in order to achieve excellence, consider whether you take the practice of the Christian life as seriously as they take their sport.  Let their example be a reminder that people are usually willing to struggle and sacrifice for what they love most in life.  For us, shouldn’t that be Jesus Christ?  And if we are not willing to take up our cross and follow Him by taking intentional steps to reorient our lives toward His Kingdom, we need to ask just what game we are playing and what team we are on.