Source: DECR
Natalya Mihailova | 07 May 2015
On 2 May 2015, the commemoration day of the Holy Prince Boris (in Holy Baptism Michael), Equal-to-the-Apostles, the celebrations marking the 1150th anniversary of the Baptism of Bulgaria began in the city of Pliska, old capital of the Bulgarian Kingdom. 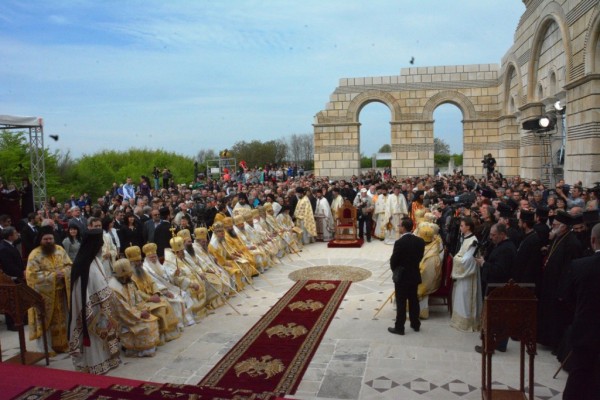 On that day His Holiness Patriarch Neofit of Bulgaria celebrated the Divine Liturgy in the open air, at the ruins of an ancient basilica, the place of the baptism of the Holy Tsar Boris (in Holy Baptism Michael). Concelebrating with the Patriarch were members of the Holy Synod of the Bulgarian Orthodox Church and representatives of the Local Orthodox Churches.

At the invitation of the Primate of the Bulgarian Orthodox Church and with the blessing of His Holiness Patriarch Kirill of Moscow and All Russia, His Beatitude Metropolitan Onufry of Kiev and All Ukraine took part in the celebrations.

Thousands of people from all over Bulgaria were praying at the Divine service. Among them were the Head of the Royal House of Bulgaria, Simeon Sakskoburggotski; the President of the Republic of Bulgaria, Mr. Rosen Plevneliev; the Prime Minister of Bulgaria, Mr. Boyko Borissov; as well as other high-ranking officials of the Bulgarian government and a number of ambassadors.

After the Divine Liturgy His Holiness Patriarch Neofit read out the Patriarchal and Synodal Message on the Occasion of the 1150th Anniversary of the Baptism of the Bulgarian People and the Commemoration Day of the Holy Tsar Boris. The message reads, in particular:

“…Today the Holy Church invites us to commemorate those whom the Bulgarian people have to give thanks for embracing the salutary truths of Christian faith. Let us commemorate the Holy Tsar Boris (in Holy Baptism Michael) whom God considered to be a worthy vessel of His grace, having enlightened his mind and heart with the true faith and destined him to follow the path of the Apostles… Building churches for the Living God and zealously helping the Church to enlighten people, St Boris wanted to the Orthodox Christian faith to be deeply rooted in our people’s life and culture. He is an example, worthy of emulation, especially today when our Orthodox people undergo spiritual ordeals and sometimes get carried away by dubious values and ideals which make them embark on a wide path of sin instead of the narrow path leading to the life eternal and the Heavenly Kingdom.”

The service was followed by an official reception, during which His Beatitude Metropolitan Onufry addressed the Primate of the Bulgarian Orthodox Church with words of greetings, saying in particular:

“Having embraced the light of Christ’s faith and being spiritually united in the baptismal font, the peoples of Bulgaria and Russia would succour each other in the times of ordeals.”

As Metropolitan Onufry noted, today Ukraine undergoes a tragic period in its history.

“The Ukrainian Orthodox Church does not just seek peace in Ukraine,” he said, “We call upon the conflicting parties to see in each other brothers, the image of God, since you cannot look at your brother through a gun sight. We must fight against sin, we must, through prayer and Christian love, humbleness and patience, stand firm against hatred and all those things that divide our nation.”

His Holiness Patriarch Neofit expressed his support to His Beatitude Onufry and to the Ukrainian Orthodox Church subjected to persecutions by those who had broken away from the Universal Orthodoxy. Patriarch Neofit noted that he was praying for the Orthodox brothers in Ukraine, asking God to give them strength to worthily endure all the ordeals.

The celebrations were completed on May 3. On that day Metropolitan John of Varna and Veliki Preslav celebrated the Divine Liturgy in the city of Varna. Among those who were praying at the service were His Holiness Patriarch Neofit of Bulgaria and representatives of the Local Orthodox Churches.

That same day the delegation of the Moscow Patriarchate, led by His Beatitude Metropolitan Onufry of Kiev and All Ukraine, left Varna for Kiev.