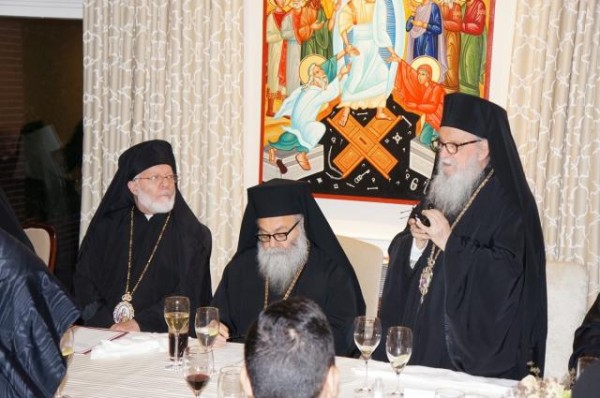 In attendance were the Antiochian hierarchs who accompanied the Patriarch, the first hierarchs of the Orthodox Churches who are located in the NY/NJ metropolitan area, representatives from the Roman Catholic church, the Syriac Catholic church, local Muslim spiritual leaders, and diplomats representing Syria, Georgia, Lebanon, and Cyprus.

His Eminence Metropolitan Joseph introduced His Beatitude and spoke about the tireless work of His Beatitude for peace in Syria, Lebanon, and the entire region. (The remarks of Metropolitan Joseph are here). His Eminence Archbishop Demetrios, first hierarch of the Greek Orthodox Church in America, spoke about the solidarity that his church has with the Church of Antioch, and assured His Beatitude that the topic of peace in Syria is a regular topic of discussion at all of his official meetings. His Beatitude addressed the assembled guests and stressed that his work for peace is for all of the people of Syria, regardless of their ethnic background or religious belief. He said that the people of Syria are very capable of solving their own problems if they are not interfered with by outsiders. He called on the superpowers of the world to work diligently to end the violence and to help to bring peace to the region.

His Beatitude will depart today, Wednesday July 29, and will return to the Middle East to resume his tireless work on behalf of his spiritual children in the region.