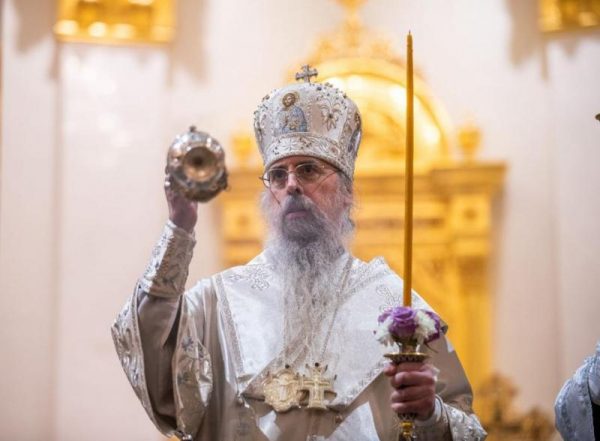 On November 22, 2021, His Grace Bishop Alexis of Bethesda, Locum Tenens of Sitka and Alaska returned from his visit to Russia. The visit spanned nine days and strengthened the relations between the Orthodox Church in America and the Moscow Patriarchate.

After arriving in Moscow, on Saturday, November 13th, His Grace concelebrated the All-Night Vigil with Metropolitan Dionysi at Novospas Monastery. During Matins, he ordained Nicholas Cugle to the subdiaconate and was hosted to a meal following the service. The next day, His Grace celebrated the hierarchical Divine Liturgy at Saint Catherine’s in the Fields Representation Church of the Orthodox Church in America where Subdeacon Nicholas Cugle was ordained to the Holy Diaconate. In attendance was also Protopresbyter Vladimir Devokov. Following the Liturgy, His Grace offered a homily.

On November 15th, a meeting took place with Bishop Alexis and Bishop Anthony of the Serbian Patriarchate at Saints Peter and Paul Church, the Serbian Representation Church in Moscow.

His Grace then traveled to Holy Trinity-Saint Sergius Lavra on November 16th. While there he had the opportunity to venerate the relics of Saint Sergius of Radonezh and Saint Innocent. During the meal, His Grace met with Bishop Theodorit, the rector of Moscow Theological Academy and discussed possible collaboration with Saint Herman’s Seminary.

From Holy Trinity-Saint Sergius Lavra, His Grace went to Pereslavl for a meeting with Bishop Theoktist at the Monastery of the Venerable Daniel. Later that day in Rostov, he met with Archimandrite Panteleimon and was hosted for lunch by Abbess Eustoli of the Convent of Saint Nicholas. His Grace then met with Archimandrite Leonty, Abbot of Spaso-Yakovleski Monastery, and had the opportunity to venerate the relics of Saint Demetrius of Rostov before his departure. Concluding his time in Rostov was a tour of the Rostov kremlin. Finally, that same evening, he had dinner in Yaroslavl at the Tolga Monastery with Metropolitan Vadim and Abbess Barbara.

On November 18th, His Grace celebrated the hierarchical Divine Liturgy at the Church of Saint James the Brother of the Lord for the feast of the election of Saint Tikhon as Patriarch of All Russia, the same church Saint Tikhon served after returning to Russia from North America. Before departing Yaroslavl for Moscow, His Grace was given a tour of the Monastery of the Kazanskya Icon and the Uspenski Cathedral.

Ending the visit to Russia was a trip to Kazan where, on Saturday November 20th and Sunday November 21st, His Grace concelebrated the All-night Vigil and hierarchical Divine Liturgy with Metropolitan Kiril at the Kazan Cathedral. Concluding his time in Kazan before traveling home, His Grace had the opportunity to visit some of the churches in the city.