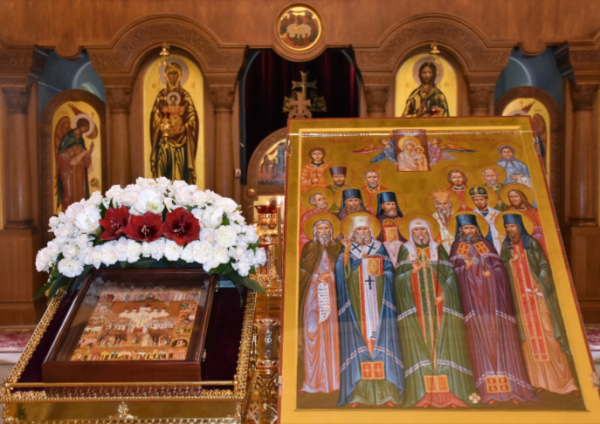 On 21 June 2020, the Day of All Saints Who Shone Forth in the Russian Land and the Community of American Saints, the Divine Liturgy was celebrated at the Great Martyr Catherine Church-in-the-Fields, the Moscow representation of the Orthodox Church in America.

As the year 2020 marks the 50th anniversary of the granting of autocephaly to the Orthodox Church in America, the OCA Moscow representation, with the blessing of His Holiness Patriarch Kirill of Moscow and All Russia and His Beatitude Metropolitan Tikhon of All America and Canada, celebrated with special solemnity the memory of ascetics who contributed to the assertion of Orthodoxy in the American continent.

After the Sunday Divine Liturgy, a prayer was said at the church’s icons of Russian and American saints.

Archpriest Daniel Andrejuk, representative of Metropolitan Tikhon to the Patriarch of Moscow and All Russia, noted that it was through the efforts of Russian ascetic devotees that Orthodoxy began its historical journey in America and now many of them are glorified as both Russian and American saints.

The first Divine Liturgy was celebrated in the territory of America (N 58°14′, W 141°) on 20 July 1741, the commemoration day of St. Elijah, on board the Peter ship under the command of Vitus Bering. It was celebrated by Hieromonk Hilarion (Trusov) and Father Ignatiy Kozyrevskiy.

A few decades later, Russian merchant Grigoriy Shelikhov visited the Valamo monastery and proposed that its abbot send missionaries to Russian America. On 24 September 1794, having covered 7 327 miles for 293 days (the longest missionary journey in the history of Orthodoxy) a group of Valamo monks reached Kodiak Island in Alaska. The mission led by Archimandrite Joasaph included Hieromonks Juvenaly, Makary and Afanasy, Hierodeacons Nektary and Stephan, and monks Herman and Joasaph.

Protomartyr Juvenaly was killed by aborigines off Iliaman Lake in 1799  and became the first Orthodox Christian who shed his blood for Christ in the New World. In 1816, Saint Peter the Aleut was put to death by Spanish missionaries in California for his refusal to embrace Catholicism. Saint Herman of Alaska, the last surviving member of the mission, passed away in the Lord in 1837.

In the 19th century the Orthodox Mission among aboriginal peoples in Alaska continued. The most prominent workers in the Vineyard of Christ were Saint Innocent (Veniaminov) and Righteous Jacob Netsvetov who translated Holy Scriptures and liturgical books into languages of the people of Alaska. Father Jacob Netsvetov died in 1864 in Sitka having devoted all his life to the service of the Church. Father John Veniaminov, after becoming a widower, took monastic vows with the name of Innocent, was consecrated as bishop and passed way in 1879 in the rank of Metropolitan of Moscow and Kolomna.

In the end of the 19th century, an event took place that played a tremendous role in the history of Orthodoxy in North America. On 25 March 1891, in Minneapolis, Bishop Vladimir (Sokolovsky-Avtonomov) of Aleutian Islands and Alaska accepted Righteous Alexis Tovt and his 361 parishioners into the Orthodox Church. It was a beginning of the return of many Greek Catholics to Orthodoxy.

Saint Tikhon (Belavin) came to America in September 1898 in the rank of Bishop of Aleutian Islands and Alaska. Being the only Orthodox bishop in North America, he travelled a lot through the continent taking spiritual care of the flock scattered on the vast territory. Aware that the Church in America cannot remain for good a part of the Russian Church, the saint focused his efforts on organizing the diocesan and parochial structure which could help strengthen and spread Orthodoxy. Saint Tikhon came back to Russia in 1907 and 10 years later was elected as Patriarch of Moscow and All Russia.

Saint Raphael of Brooklyn was the first Orthodox bishop to be consecrated in North America. He was consecrated by Bishop Tikhon and Bishop Innocent (Pustynsky) at the St. Nicholas Cathedral in New York on 13 March 1904. As the bishop of Brooklyn, Saint Raphael remained a faithful assistant to Saint Tikhon and his successors at the see of North America. He passed away on 27 February 1915.

In the 20th century, after the October Revolution, thousands of Orthodox people in Russia suffered martyrdom for refusal to reject Christ. Among them were Holy Martyrs Ioann Kochurov and Alexander Khtovitsky, who had served in North America before their return to Russia. Saint John became the first priest to martyr in Russia; it happened on 31 October 1917 at Tsarskoe Selo; Holy Martyr Alexander Khotovitsky, who had served in America till 1914, was executed by shooting in 1937.

Among especially loved devotees of the Russian Diaspora of the last century is Saint John (Maksimovich), Archbishop of West America and San Francisco, who died in 1966.