Patriarch Irenaeus: ‘Family as a Holy Union is Increasingly Threatened and Ruined under Various Impacts of the Modern World’ 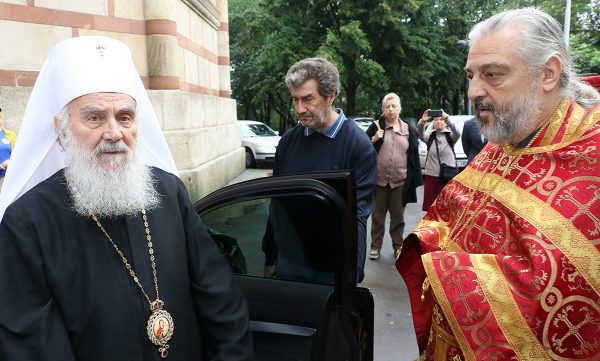 On July 8, 2018, the commemoration day of Ss Peter and Fevronia of Murom, His Holiness Irenaeus, Patriarch of Serbia, presided over the Divine Liturgy at Belgrade representation of the Russian Orthodox Church’s church of the Holy Trinity. The Primate of the Serbian Orthodox Church was assisted by Archpriest Vitalij Tarasjev, rector of the metochion, and Belgrade clergy.

The service was attended by A. Konanykhin, Russian cultural attaché in Belgrade; N. Popovic, Serbia’s minister of innovations and technological development; Ms. M. Radojevic, director of the Serbia’s Office for Religious Affairs; and Ms. N. Kuschenkova, director of the Russian House in Belgrade. Among the worshippers were representatives of the Night Wolves motorcycle club who are on a pilgrimage to Serbian holy places.

Addressing Patriarch Irenaeus, Archpriest Vitalij Tarasjev noted with gratitude that for several years now, the head of the Serbian Orthodox Church marks the Day of Ss Peter and Fevronia with the Divine Liturgy at the Moscow Patriarchate representation in Belgrade. For the prayerful memory, the rector of the methochion presented His Holiness with an icon-lamp, stressing that its light symbolizes His Holiness’s constant prayer and care for the flock.

His Holiness greeted the worshippers on the occasion of the Day of Ss Peter and Fevronia as ‘intercessors for the sacredness of the Christian marriage’ and reminded the congregation that marriage was established by God immediately after the creation of the world.

At the same time, he said, the Lord gave His blessing upon childbearing and for spouses there is no honour greater than ‘to be God’s co-workers in the creation of life’. ‘However’, he continued, ‘in our time, the family as a holy union is increasingly threatened and ruined under various impacts of the modern world’. Any deviation from God’s will, he said, and rejection of the family values and childbearing lie in the basis of demographic problems in various European countries, including Serbia.

Speaking about Prince Peter and Princess Fevronia as holy patrons of the Christian family, Patriarch Irenaeus said, ‘The Russian Church has established this great feast. On this day, we should think about the enormous problem of our time, and may we be obedient to the voice of the Church and the Lord’s commandment ‘to be fruitful, and multiply’ and let us glorify God by bearing children’.

The liturgy was followed by a grand reception. 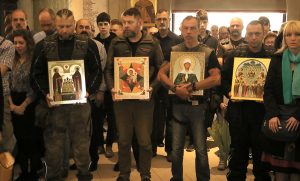 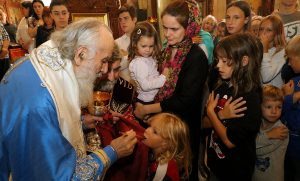