Today Russia Celebrates the Memory of Saints Peter and Fevronia and the Day of Family, Love and Fidelity 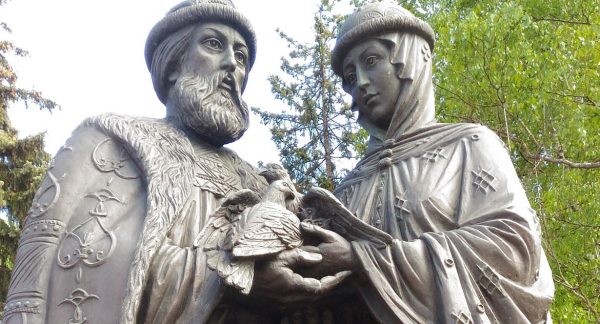 Today, July 8, 2021, the commemoration day of the patrons of Orthodox marriage – the holy noble prince Peter and princess Fevronia of Murom – Russia traditionally celebrates the Day of Family, Love and Fidelity.

This year Russians celebrate this holiday for the 13th time. In many regions of the country various festive events take place on this day, in particular, “July 8 – Day Without Divorce.”

The initiative for the appearance of the all-Russian holiday belonged to the residents of Murom, and in 2008 the idea of ​​the holiday was supported by many public organizations and figures, as well as the Russian Orthodox Church. The organizing committee of the celebration was headed by Svetlana Medvedeva.

Chamomile was chosen as the symbol of the holiday, since this wild flower, widespread in Russia, has long been considered a sign of love.

In the 13th century, the city of Murom was ruled by Prince Peter and Princess Fevronia, the daughter of a beekeeper, who cured the prince of a serious illness. Peter fell in love and married a commoner, overcoming the resistance of the boyar entourage, who did not want to obey his wife.

The couple lived a life of loyalty and love and died on the same day. The relics of the saints rest in the Holy Trinity Monastery in Murom.

One of the most striking moments in the lives of the saints is the story of their death.

When old age came, Peter and Fevronia accepted monasticism with the names David and Euphrosinia and prayed to God to die at the same time. They bequeathed to bury themselves together in a specially prepared coffin with a thin partition in the middle. They died on the same day and hour, each in his own cell.

However, people considered it wicked to bury monks in one coffin and decided to break the will of the dead. Twice their bodies were carried to different temples, but twice they miraculously turned out to be nearby. So they buried the holy spouses together near the cathedral church of the Nativity of the Most Holy Theotokos.

In the 16th century, they were canonized and are considered the Orthodox patrons of the family.