Source: DECR
Natalya Mihailova | 22 June 2015
On 20 June 2015, His Holiness Patriarch Kirill of Moscow and All Russia arrived in Minsk with his primatial visit to the Byelorussian Orthodox Church. 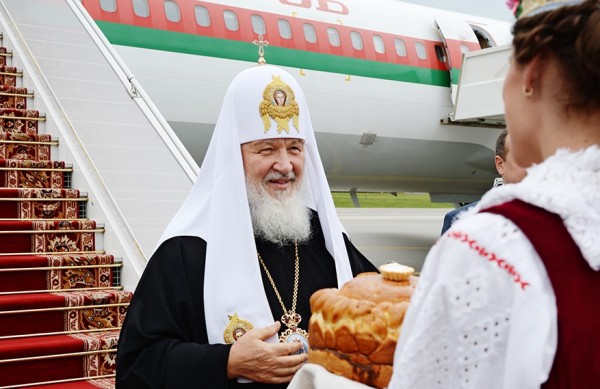 His Holiness and his suite were met at Minsk-2 airport by Metropolitan Pavel of Minsk and Zaslavl, Patriarchal Exarch of All Belarus; Byelorussian Deputy Prime Minister Ms. Kochanova; Commissioner for Religious and Ethnic Affairs of Belarus Mr. Gulyako; head of the State Protocol Service of the Byelorussian Ministry of Foreign Affairs Mr. Sluka; H.E. Alexander Surikov, Ambassador Extraordinary and Plenipotentiary of the Russian Federation to the Republic of Belarus; bishops and clergymen of the Byelorussian Exarchate.

In his talk with the journalists His Holiness Patriarch Kirill noted ‘I always come to Belarus with good feelings. This time my visit is linked to the celebration of the 1000th anniversary of the demise of Prince Vladimir who has made a good beginning of Christian civilization of the East Slavs by uniting fraternal nations in Orthodox faith. I am happy to visit Belarus which is a precious stone in marvelous crown of Orthodox Christian nations.’