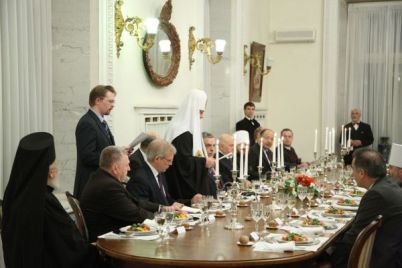 On 26 March 2013, His Holiness Patriarch Kirill of Moscow and All Russia attended reception given by H.E. Michael Spinellis, Ambassador Extraordinary and Plenipotentiary of the Hellenic Republic to the Russian Federation, on the occasion of the Sunday of Orthodoxy celebrated on the first Sunday in Lent.

His Holiness Patriarch Kirill thanked the ambassador for the opportunity to meet with representatives of the Greek diaspora and Russian state and public leaders on the occasion of the feast.

Ambassador Spinellis noted that the twenty-years-old tradition to mark the feast has become an historical event symbolizing unity and mutual understanding that have always been a characteristic feature of our Orthodox nations and people of Christian Europe. He recalled the events happened during his office in Moscow, such as visits to the Russian Orthodox Church paid by His Holiness Patriarch Bartholomew of Constantinople, His Beatitude Patriarch Theodore of Alexandria, His Beatitude Archbishop Hieronymus of Athens and All Greece. He considers these as a testimony to the high level of our relations and to the fact that the Church continues to play her most important part in history and everyday life of our people and countries.

His Holiness Patriarch Kirill addressed those gathered, saying in particular that “the Orthodox world is going through difficult time. The Orthodox Church has repeatedly drawn attention of world public to the moral dimension of the current crisis and called people to mutual support, solidarity and actions aimed at the affirmation of Christian ideals in society.

“It is remarkable that public role of the Church of Greece has been vividly played in the time of crisis. The Church remains a custodian of faith and morality and consolidated healthy forces of society.

“The Russian Orthodox Church has seen the difficulties of her fellow believers in Greece and has not remained indifferent. Last May I met with His Beatitude Archbishop Hieronymus, and it was decided to render support to social projects of our sister Church of Greece. Also, we are developing pilgrimage to the holy sites of Greece. Many Russian people like to visit Greece because it is an Orthodox country in which they can feel spiritual affinity.

“I believe that consolidation and exchange of experience, more frequent contacts will bring good to the Orthodox people for whom the Moscow Patriarchate cares and the people of Greece. I am confident that Orthodox Christians of different nationalities can master all trials through common efforts.”

His Holiness expressed his special gratitude to Ambassador Spinellis who will soon leave his post for his selfless labours in the field of strengthening fraternal relations between people of Greece and Russia and wished him good health and the blessed success in his career of diplomat in future.

Most viewed articles
Patriarch Daniel explains why the Hesychasts were the most sought-after spiritual fathers and what is a prayerful reason141
The Trap of Religiosity120
Bishop Nicholas of Manhattan visits Holy Cross Monastery in West Virginia87
Why Everything Is Important (but not the stuff you might imagine)82
Condolences of Patriarch Kirill over the death of believers in the fire that broke out in Abu-Seifein Church in Cairo51
25 Years of Help: the Ship-Church Goes On its 25th Voyage to Distant Villages51
St. Tikhon Church to host Liturgical Music Symposium in October 202245
Ukrainian Church Celebrates Metropolitan Onuphry’s 8th Anniversary of His Enthronement25
The Transfiguration – Glory and Sacrifice23
Most popular authors
Pravmir.com team259
Aurelian Iftimiu141
Vasileios Stoyiannos120
Archpriest Stephen Freeman82
Priest Luke A. Veronis23