On March 6, the 400th anniversary of Mikhail Feodorovich Romanov’s enthronement as Tsar, His Holiness Patriarch Kirill of Moscow and all Russia celebrated the Divine Liturgy in the Patriarchal Cathedral of the Dormition in the Moscow Kremlin. 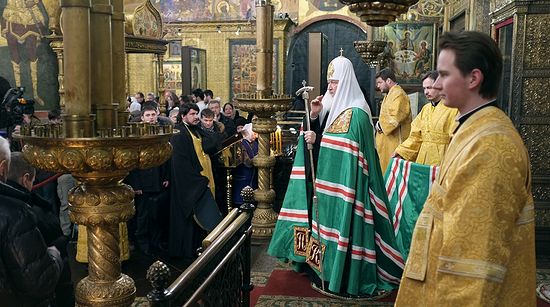 Also present at the service were: the head of the Russian Imperial House Grand Duchess Maria Vladimirovna, the great-great-grandson of Emperor Alexander III, P.E. Kulikovsky, the Chairman of the Association of Russian Nobility, Prince G. G. Gagarin, and the Deputy Chairman of the State Duma Committee of the Russian Federation for Public Associations and Religious Organizations, M.Y. Markelov.

The Moscow Synodal choir, led by Alexei Puzakov, and the choir of the Academy of Choral Arts, led by Alexei Petrov, sang at the service. Archpriest Artemy Vladimirov, the Rector of All Saints Church in Krasnoye Selo in Moscow, gave a sermon before communion.

At the Liturgy prayers were said “for the eternal repose of the souls of the departed servants of God, the ever-memorable rulers of Holy Rus’, faithful princes and princesses, tsars and tsarinas, and all who were in authority and with diligence cared for the purity of the faith and ruled our land in the faith of the Christian law—and the names of Tsars, Emperors and Empresses of the House of Romanov were enumerated.

After the Liturgy a short service of intercession to the Holy Royal Martyrs was celebrated: to Tsar Nicholas II, Tsarina Alexandra and the royal children, Alexey, Olga, Tatiana, Maria and Anastasia.

His Holiness Patriarch Kirill gave a speech as First Hierarch to those who took part in the service.

This was followed by a procession to the Cathedral of the Archangel Michael – the burial place of many rulers of Russia, including Romanovs. A short memorial service was celebrated in the Cathedral for the repose of the souls of Russia’s rulers, ‘buried in this place of repose and elsewhere’ with the enumeration of the names of rulers from the House of Romanov. (Report from the Press Service of the Patriarch of Moscow and all the Russias).

The procession to the Cathedral of the Archangel Michael was accompanied by ‘the solemn ringing of bells’, a peal used for processions. After the short memorial service in the Cathedral a triumphal royal peal of bells was performed – revived by the bell-ringers of the Kremlin and the Cathedral of Christ the Saviour on the basis of the peal of bells in the coronation scene in Musorgsky’s opera ‘Boris Godunov’. It was performed on the bells of the first, second and third stages of the bell-tower of Ivan the Great, using the ‘Reut’ bell, which hangs in the Dormition belfry. The ‘Reut’ is the oldest 1000-pood (over 16 tons) Russian bell, and was cast in 1622 by the master-founder Andrei Chokhov. The inscription on the bell mentions Tsar Michael Feodorovich Romanov and his father, Patriarch Philaret Nikitich Romanov.