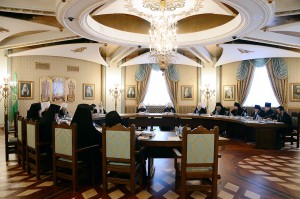 On 7 March 2013, the Supreme Church Council of the Russian Orthodox Church met for its first in 2013 session under the chairmanship of His Holiness Patriarch Kirill of Moscow and All Russia.

The Primate of the Russian Church addressed all those present in the hall of the Supreme Church Council of the Cathedral of Christ the Saviour with an opening speech.