On 4 April 2019, the Holy Synod of the Russian Orthodox Church began its session at the Patriarchal and Synodal residence in Danilov Monastery in Moscow under the chairmanship of His Holiness Patriarch Kirill of Moscow and All Russia.

The Primate of the Russian Orthodox Church opened the session and addressed those gathered, saying: “I cordially greet all members of the Holy Synod. There are seventeen items on the agenda, one of which is the approval of the topics of the 28th International Christmas Readings.

The Supreme Church Council has paid much attention to them and after a prolonged discussed decided unanimously to present the topic “The Great Victory: Heritage and Heritors” to the Holy Synod. The topic is important in the context of the jubilee year of the victory. However, it is not enough to talk about the past. It is important to make a link of the Victory, which our nation won under the incredibly hard conditions, with the present time, to ponder over an ability of modern men to perform a deed and over the place of the Church in the formation of spiritual and moral patriotic feelings of people that will help them in peaceful years and – God forbid! – in the years of trials to remain faithful to historical tradition of our country to defend the Fatherland.” 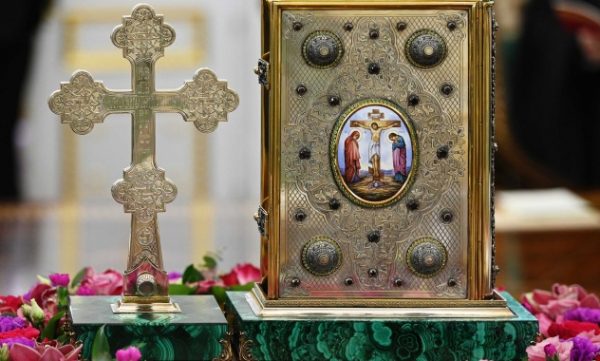 Members of the Synod resolved to support the Statement of the Synod of the Ukrainian Orthodox Church of April 3. It reads: “The idea of overcoming the church schism in Ukraine by the granting of the Tomos of autocephaly to the uncanonical church groups (“UOC-KP” and “UAOC”) has turned out to be an error. None of the Local Orthodox Churches has recognized this illegal act perpetrated by the Patriarchate of Constantinople while a large part of the Local Churches, including the Churches of Antioch, Russia, Serbia, Cyprus, Albania, Poland and Orthodox Church of the Czech Lands and Slovakia, have already expressed in various forms their disagreement with the decisions made by the Patriarchate of Constantinople. The Local Churches have also stated that they did not recognize the newly created “Orthodox Church of Ukraine” as well as consecrations performed in this structure and prohibit their clergy to have any prayerful contacts and liturgical concelebration with its representatives in any form whatsoever. Thus, there was no reception, in other words acceptance, by world Orthodoxy of the actions perpetrated by the Patriarchate of Constantinople; which, in fact, has attempted to legalise the schism. Indeed, the legalization of the schism is not a way along which church unity can be achieved. We remind you that according to the historical-canonical tradition of the Church, autocephaly is granted only to a one Church within a certain state, and not to any part that has broken off from the Body of the Church.”

The Holy Synod voiced full support to the canonical Ukrainian Orthodox Church which is undergoing hardships.

The participants in the meeting underscored that the plenitude of the Russian Orthodox Church highly appreciates courage and firmness of the bishops, clerics, monks and nuns and pious laypersons of the Ukrainian Orthodox Church at the time of persecutions unleashed against it by the current state authorities of Ukraine.

Invited to the summer session (March-August) were Archbishop Serafim of Kaliningrad and Baltiysk, Archbishop Roman of Yakutsk and Lensk, Archbishop Antony of Vienna and Budapest, Bishop Leonid of Turov and Mozyr, and Bishop German of Sochi and Tuapse.