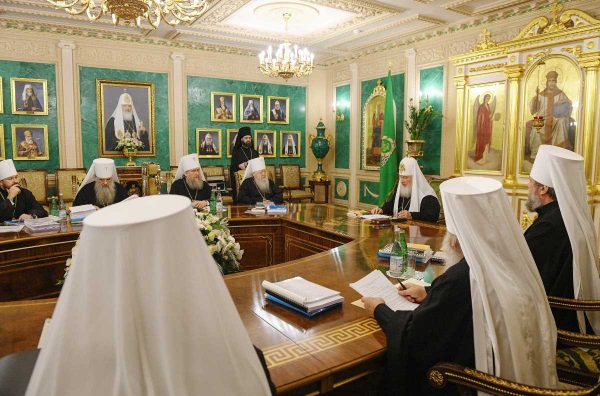 The statement was adopted at the session of the Holy Synod of the Russian Orthodox Church on 26 February 2019.

The granting of the “tomos of autocephaly” by the Patriarchate of Constantinople to the so-called “Orthodox church of Ukraine,” created artificially by a merger of two schismatic organizations, deepened the division between Orthodox Christians in Ukraine and worsened ever more considerably the inter-confessional relations.

Causing particular concern is a gross interference of the state authorities of Ukraine in the internal church life, as well as politicians’ attempts to use the Church in their opportunistic interests. By doing so they violate the fundamental human rights and freedoms secured, for instance, by the Constitution of Ukraine.

The discriminatory bills were adopted by the Verkhovna Rada of Ukraine and took effect, aimed at depriving the Ukrainian Orthodox Church of its name and at legalizing the practice of seizing its church buildings and monasteries. Believers of the canonical Church were denied other rights as well: its clergymen were deprived of an opportunity to take proper pastoral care of military and law enforcement personnel and prisoners.

Threats are being made to take away from the Ukrainian Orthodox Church its largest monasteries and historical shrines – the Kiev Caves and Pochaev Lavras.

In most cases, seizures of church buildings take place in spite of religious communities’ decisions to remain in the canonical Church. A religious community’s decision is being replaced by a vote of a public gathering of the citizens who by no means always are members of a parish of the Ukrainian Orthodox Church. Minutes of such gatherings receive immediate approval from the authorities, and after that a church building is seized with the assistance of security and law enforcement units.

In this difficult situation we call upon all the faithful children of the Russian Orthodox Church to intensify prayer for their suffering brothers and sisters in Ukraine, so that the Lord may grant them fortitude and Christian patience in defending the holy Orthodoxy.

We call upon the state authorities of Ukraine to stop persecution of their own citizens who do not want to join the schism.

We ask the brotherly Local Orthodox Churches to prayerfully support the persecuted Ukrainian Orthodox Church led by Metropolitan Onufry of Kiev and All Ukraine.

We call upon the world community to direct attention towards the facts of flagrant violation of human rights and to give proper assessment to the gross interference of the Ukrainian state in the affairs of the Church.