His Holiness Patriarch Kirill leads procession of the cross marking the 700th anniversary since St Peter, first Metropolitan of Moscow, began his service in Moscow

Source: DECR
Natalya Mihailova | 07 September 2015
On 6 September 2015, after celebrating the Divine Liturgy at the Patriarchal Cathedral of the Dormition in the Moscow Kremlin, His Holiness Patriarch Kirill of Moscow and All Russia led a procession of the cross from the Kremlin to the Vysokopetrovsky Stavropegic Monastery, marking the 700th anniversary since St Peter, First Metropolitan of Moscow, began his service in Moscow and the 700th anniversary of the foundation of the Vysokopetrovsky Monastery. 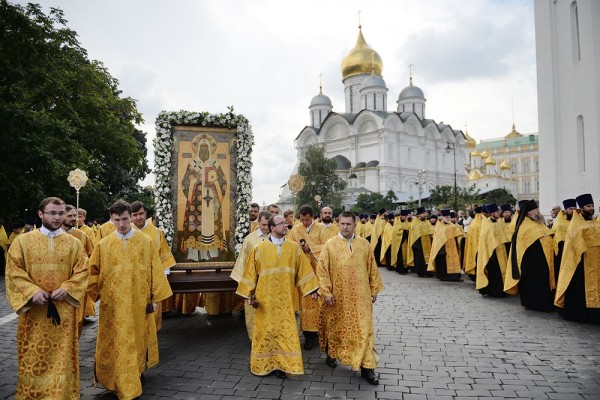 A legend says that upon his arrival in Moscow in 1315, Metropolitan Peter walked all the way from the Kremlin to the high bank of the Neglinka River where he founded a monastery which was afterwards called in his honour. 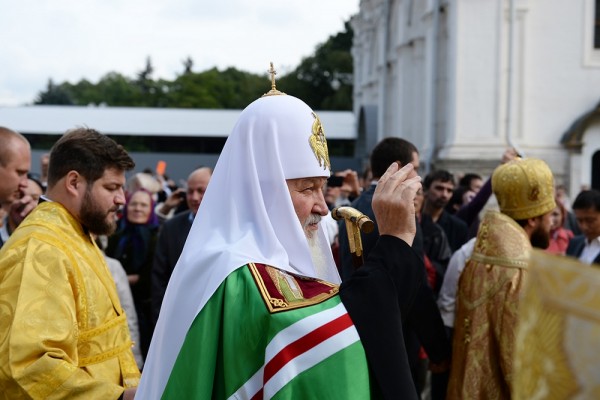 According to the data provided by the Moscow Police, over ten thousand people, including the clergy and parishioners of the Moscow churches, took part in the procession. 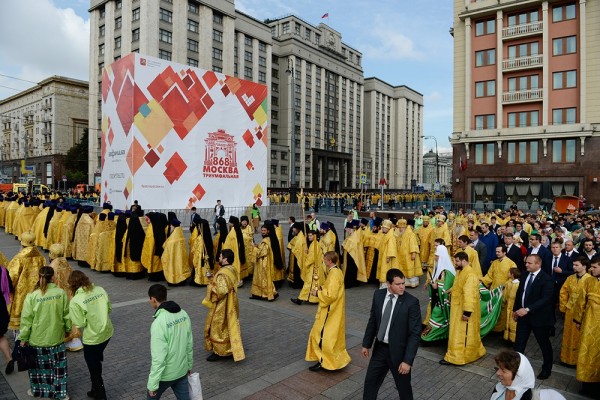 At the entrance to the Vysokopetrovsky Monastery, His Holiness Patriarch Kirill said a thanksgiving to St Peter, Metropolitan of Kiev, Moscow and All Russia, and addressed the worshippers with his Primatial homily.

Mr. Alexander Beglov, Plenipotentiary Envoy of the President of the Russian Federation to the Central Federal District, read out a message of greetings from President Vladimir Putin.

To mark the celebrations, His Holiness Patriarch Kirill granted the Vysokopetrovsky Monastery an altar Gospel and presented Hegumen Petr (Yeremeyev), abbot of the monastery, with a pectoral cross made on the occasion of the millennium of the blessed demise of the Holy Prince Vladimir, Equal-to-the-Apostles.

Press-Service of the Patriarch of Moscow and All Russia