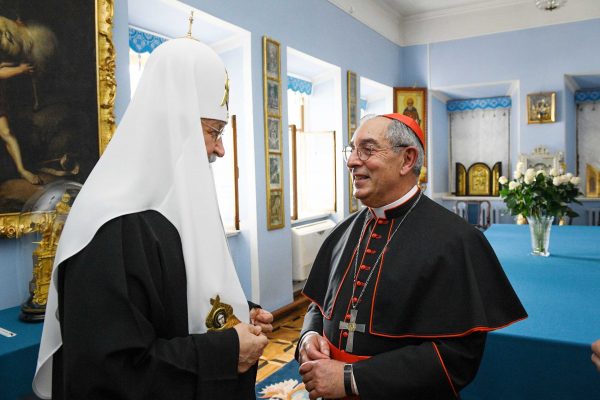 On 3rd May 2019, Friday of the Bright Week, after the Divine Liturgy His Holiness Patriarch Kirill of Moscow and All Russia met with a group of pilgrims from the Roman Catholic Church led by Cardinal Angelo De Donatis, Vicar General of Rome.

The meeting took place in the Patriarchal Chambers of the Lavra of the Holy Trinity and St. Sergius.

The group also includes six hierarchs and 75 priests from Italy.

Accompanying the pilgrims in Russia was Hieromonk Grigory (Matrusov), a cleric of the Cathedral of Christ the Saviour in Moscow.

“This year the Roman Catholic Church and the Orthodox Church celebrate the Radiant Resurrection of Christ one week apart. I highly appreciate that clerics of the city of Rome led by the cardinal, Vicar General of Rome, have arrived in the Lavra of the Holy Trinity and St. Sergius and are visiting the Russian Orthodox Church in this Paschal season. Pascha is the best time to come to Russia and to gain insight into the Russian soul: great many people attend night services, the atmosphere of feast is felt not only in families, but even in the street. And we, of course, rejoice that such revival of religious life has taken place after decades of severe persecutions.

“The recent years have seen positive dynamics in the development of relationships between our two Churches. I would like to particularly emphasize the importance of the meeting in Havana, when I had an opportunity to meet with His Holiness Pope Francis. We discussed many significant issues, but the main thing was that we could feel that we are two men responsible for enormous Christian communities, for two very large Christian communities. It seems that the understanding of this responsibility predetermined a very important direction in the development of our dialogue. The effects of that meeting were very positive. In 2017 the relics of St. Nicholas the Wonderworker were brought to Moscow and St. Petersburg. Such a great spiritual event was made possible thanks to the meeting in Havana. Two and a half million people venerated the relics; people were standing days and nights in long queues, notwithstanding the weather; thousands of our volunteers helped them.

“I believe that our meeting in Cuba gave a fresh impetus to the development of Orthodox-Catholic relations in various spheres. An Orthodox-Catholic working group was established within the framework of the Civil Society Dialogue Forum. As for the cultural cooperation, we have been developing a project of Summer Institute for students of Pontifical universities in Rome. For instance, at the premises of our Ss. Cyril and Methodius Institute of Postgraduate Studies various scholarly meetings and events take place. Besides, during summer months we provide an opportunity to representatives of the Roman Curia and educational institutions of Rome to come to Moscow and learn more about our academic activities and the life of our Church.”

“I would also like to thank the Italian Episcopal Conference for their goodwill towards the Russian Orthodox Church’s presence in Italy. Today, as you know, many Russian and Russian-speaking people live in Western Europe. Our pastoral work in various countries, including Italy, is aimed, first of all, at these people, and I would like to thank the Italian bishops for providing church buildings for our liturgical activities.”

“Once again I would like to cordially greet you, thank you for the visit, and ask you to convey to His Holiness my brotherly love and joy over this opportunity to meet with you.”

Cardinal Angelo De Donatis thanked His Holiness Patriarch Kirill for the opportunity to visit the Lavra, saying, “The place of St. Sergius’ repose is a place where our hearts open up to see the light of the Resurrection.”