Source: DECR
Natalya Mihailova | 16 April 2015
On 15 April 2015, His Holiness Patriarch Kirill of Moscow and All Russia met with Panos Kommenos, Greece’s Minister of National Defence and leader of ‘The Independent Greeks’ political party. 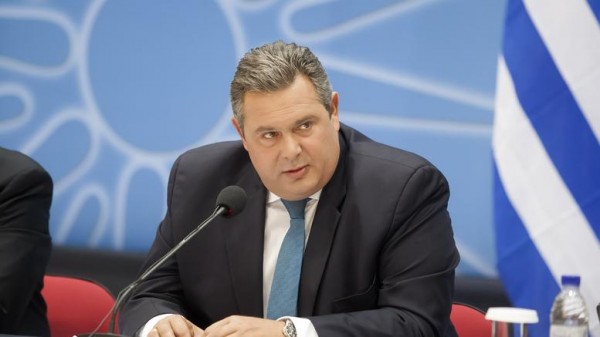 They were joined in the meeting, which took place at the Patriarchal and Synodal residence in St. Daniel’s Stavropegic Monastery, by archpriest Nikolai Balashov, vice-chairman of the Moscow Patriarchate’s Department for External Church Relations (DECR), and deacon Anatoly Churiakov, a staff member of the DECR secretariat for inter-Orthodox Relations.

Welcoming the guest, His Holiness Patriarch Kirill expressed his joy over meeting with him during Bright Week and mentioned his recent meeting with the Prime Minister of Greece, Alexis Tsipras.

The Primate of the Russian Orthodox Church noted the importance of the development of relations between Russia and Greece and underscored that these relations were influenced by the belonging of the majority of the population to Orthodoxy. He said: ‘The Orthodox factor plays a special role in the relations between Greece and Russia. Governments, parties and even political regimes in our countries change, but relations between people have always been good because they are maintained on the basis of Orthodoxy.’

Patriarch Kirill said that Panos Kommenos was a founding member of the Inter-Parliamentary Committee on matters regarding Hellenism and Orthodoxy and told the guest about the State Duma interfactional deputies group for protection of Christian values. His Holiness also mentioned the Inter-Parliamentary Assembly of Orthodoxy in which deputies from Greece, Russia and other countries work.

His Holiness noted minister Kommenos’ stand on the support (including the material one) of the important educational and social work done by the priests of the Orthodox Church of Greece, especially in rural areas, where the Church serves as a real centre of life in community.

Patriarch Kirill spoke of the necessity of pan-Orthodox and pan-Christian solidarity. ‘I believe that the main concern of all Christians today should be the situation of the Christian populations in the Middle East and North Africa,’ he said.

‘I have information about atrocities committed against Christians, in the north Iraq in particular. I happened to visit these areas and saw many churches and monasteries. Fir instance, there were forty-five churches in Mosul, but none at present. This is a disaster. Who will build churches in the city? Four hundred churches had been destroyed in Syria. Yet, the most awful thing is that people are fleeing from the regions controlled by the Islamic State. If the situation prevails, there will be no Orthodox and Christian presence in the Middle East; Christians will be ousted from the land where Christianity has come into being. The presence of Christian minority was a factor conducive to tolerance and good relations between Christians and Moslems.’

His Holiness shared with the guest his reminiscences of the visit to Syria in the beginning of war. ‘I heard many people’s words of support of President al-Assad. They said: “We live calmly here.” Christians would say: ‘We are protected. Our Orthodox citizens serve in the army; there are Orthodox generals. Also, there are Orthodox ministers in the government and professors in universities.” And now, Islamic radicals pull down churches, expel people, rape women, and kill children.’

Patriarch Kirill noted the importance of the Russian state’s position on the Syrian problem and continued: ‘I believe that all people should pay special attention to the situation of Christians in the region, also in dialogue with the Islamic governments. Christianity today is the most persecuted and oppressed religion. We see this in Nigeria, Pakistan, and North Africa. Even in some European countries people are banned from wearing a cross in offices; invoking a necessity of tolerance, words “spring festival” are used instead of “Christmas”; Easter is not called Easter, but a spring festival. We have a lot to do in this regard, also on the international level and in dialogue with the government of other countries.’

His Holiness underscored deep sorrow for the situation in Ukraine and said: ‘Certain events have triggered off a mechanism of civil war, and the opposing forces have clashed in a terrible fight. Our Church finds itself in a very difficult situation, as its believers live in Kiev and in the east and west regions of the country.’ Patriarch Kirill is convinced that the Church must keep its potential for peacemaking. It loses it when it adopts a certain political position. For instance, the Ukrainian Greek Catholic Church and the schismatic “Kievan Patriarchate” have sided with one party to the conflict, thus feeding the flame of passion.

‘We are trying to do anything possible to harmonize hostile parties and restore relations among people. We have managed to do something, but a peacemaking position is always vulnerable, as each party wants to find justification and substantiation of its stand in the Church. Nonetheless we will continue our ministry, as a time will come to gather stones. It is amazing to see that there is no institution in Ukraine today except the Church which is capable to do it. Therefore we are carrying our cross fully comprehending the importance of this mission.’

Minister Kommenos said that he was happy to meet with the Primate of the Russian Orthodox Church and present his compliments. He mentioned that the political party he leads stands up for the preservation of traditional Christian values and expressed his support to Patriarch Kirill’s position on the situation in the Middle East and to peace efforts of the Russian Orthodox Church in Ukraine, noting the necessity of peaceful settlement in the country.

Minister Kommenos also spoke about the Russia-Greece bilateral year 2016 and celebration of the millennium of the Russian presence on Mount Athos. He said: ‘I want to assure Your Holiness that we will do the utmost to celebrate this event with grandeur which it deserves,’ noting the importance of this jubilee for Mount Athos and for the development of relations between Russia and Greece.

Most viewed articles
How Can We Evangelize Today?202
Five Signs of a Modern Pharisee190
Trial of Politician Defending Traditional Marriage Begins in Finland100
Medical Workers Walk 1.5 Km Through Snowdrifts and Save the Life of a 100-Year-Old Woman97
Bad Habits And Their Cure70
Grains of Wisdom and Piety Book Published68
ROC Holy Synod Discusses the Announcement of the Patriarchate of Alexandria Concerning the Establishment of the ROC Patriarchal Exarchate of Africa53
Patriarch Daniel prays for Romania’s national unity, peaceful coexistence and dignified cooperation with other peoples37
150th anniversary of the establishment of the North American diocesan see in San Francisco31
Most popular authors
Pravmir.com team349
Frederica Matthewes-Green202
Archimandrite Markell (Pavuk)190
Saint Nicodemus the Hagiorite70
Aurelian Iftimiu37