On 26 March 2013, His Holiness Patriarch Kirill of Moscow and All Russia met with H. E. Rubén Alberto Beltrán Guerrero, the newly appointed Ambassador Extraordinary and Plenipotentiary of the United Mexican States to the Russian Federation. They were joined in the meeting, which took place at the Patriarchal and Synodal residence in St. Daniel’s Monastery, by hegumen Philaret (Bulekov), vice-chairman of the Moscow Patriarchate’s Department for External Church Relations (DECR), Mr. Pablo Lozano, minister counsellor of the Embassy of Mexico in Moscow, and Mr. Miguel Palacio, a staff member of the DECR Secretariat for far abroad countries who acted as an interpreter. 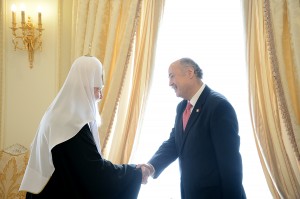 His Holiness Patriarch Kirill greeted the guests and said that Ambassador Beltrán had a great experience in diplomacy and it is wonderful that the person with such a background would represent friendly Mexico in Moscow.

His Holiness added that history of relationship between Russia and Mexico has been “very positive.” A lot our compatriots went into exile from Russia to Mexico after the revolution of 1917; many of them won high positions in society and made a notable contribution to the life of the country. A new wave of emigration from the Soviet Union happened in the 1970-80s, bringing forth new families of the Mexicans and Russians.

His Holiness continued saying that many Russian tourists have visited Mexico recently; economic relations between the two countries have been intensified; and the presence of the Russian Orthodox Church in Mexico has expanded.

“Russia and Mexico have much in common. Christian values occupy an important place in national culture and national psychology, and I believe that they can form a good world outlook and moral basis for the development of relations between our countries,” the Primate of the Russian Church said.

He mentioned his visit to Mexico in 1998 for blessing a Russian church in the town of Nepantla. During this trip His Holiness, then Metropolitan of Smolensk and Kaliningrad, met with representatives of religious communities of the country. “I must say that we respect tremendous work done by the Catholic Church in Mexico and rejoice at the significant improvement of relations between the Catholic Church and the State,” Patriarch Kirill noted.

He is confident that Christians can bring positive contribution into the development of relations among nations. “I hope that you, Your Excellency, will also contribute to the relations between our countries.”

Ambassador Beltrán thanked His Holiness for the meeting, saying it was a great privilege to be received at such a meaningful time for the Russian Orthodox  Church – Lent, when many divine services are celebrated. He conveyed greetings to His Holiness from the President of Mexico, Enrique Peña Nieto, in office since last December. The ambassador said that the government was deeply concerned about social problems of the country and underscored that the people of Russia and Mexico had identity of spirit and culture and also desire for peace with justice. He thanked His Holiness and said that he gave a great weight to meeting him as Patriarch Kirill is a person of “world-wide importance.”