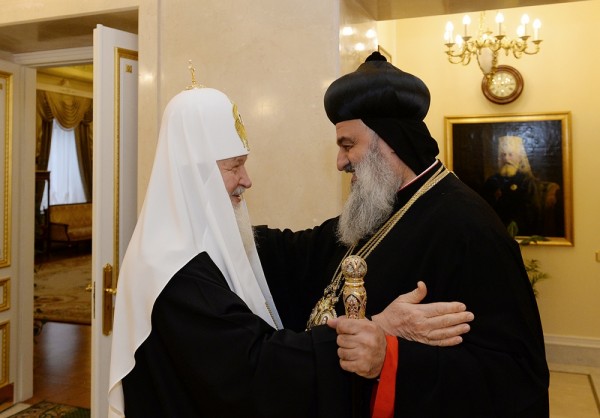 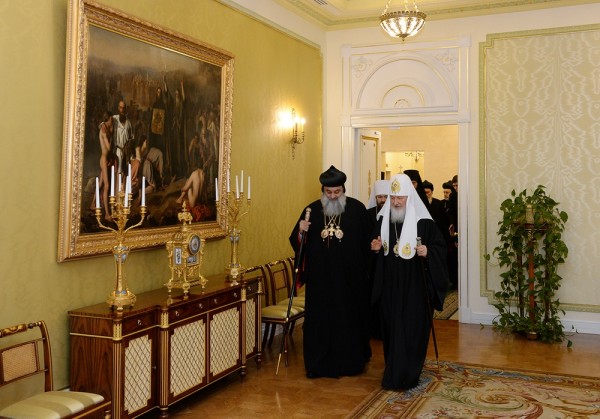 The relations between the two Churches began to develop in the second half of the 20th century, His Holiness Kirill said and added that it would be erroneous to believe that there had been no contacts between the Russian Orthodox and representatives of the Syriac Orthodox Church before that time. “Right after our ancestors had become Christians, many pilgrims headed to the Middle East. There, on the lands of Syria, Palestine and Iraq our people who visited the holy sites met with your Church. These contacts were made on the level of human hearts, on the level of experience and introduction of pilgrims to the life of your Church,” His Holiness said, adding that any time in history when the life of Christians in the East was threatened, Russia considered it her duty to help them.

At present Christian communities are experiencing hard times. “Their suffering can be compared with that of the first Christians who had been persecuted by the Roman pagan powers. Yet, there are differences: the Roman had not destroyed houses and settlements, while the contemporary foes of Christianity are destroying houses and entire settlements and are ousting thousands upon thousands of Christians from places where they used to live for centuries.”

The Primate of the Russian Orthodox Church cited the horrible statistics about of Christians who died, were persecuted and uprooted from their homes.

His Holiness Patriarch Kirill expressed deep concern over the fate of Metropolitan Mor Gregorios Johanna Ibrahim whom he has known for several decades. Metropolitan Mor Gregorios Johanna Ibrahim and Metropolitan Paul of Aleppo, a hierarch of the Orthodox Church of Antioch, were abducted by the extremists in northeastern Syria over two years ago, and there is no reliable information about them. It is unknown whether they are alive or not.

His Holiness Patriarch Kirill mentioned his visit to Syria and Lebanon in November 2011, when the conflict has already begun: “I met with the leaders of Christian communities, and our brothers Christians openly said that the consequences of this war could be awful for Christian population. While in Lebanon, I was surprised to hear from representatives of Christian communities that had been traditionally connected with the West that the West had abandoned them, not defending them, saying nothing of Christians who had not been traditionally connected with the West.” His Holiness added that these words had deeply moved his heart and urged him to do anything possible to mobilize people to defend and support Christians in the Middle East. 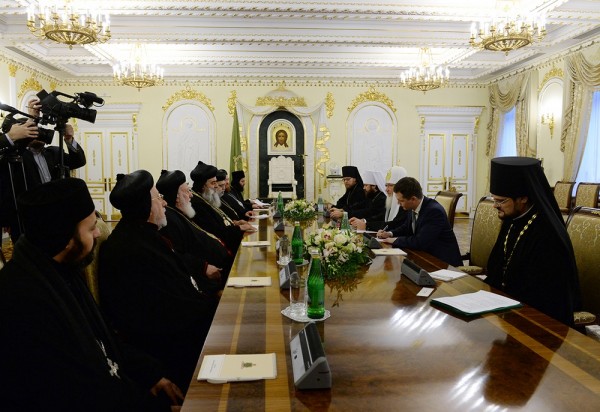 The Holy Synod of the Russian Orthodox Church has made several statements on the situation of Christians in the Middle East; His Holiness Patriarch Kirill has spoken about the problem with and leaders of international organizations and the heads of states, including the state authorities of the Russian Federation. In 2013, The Primates and representatives of the Local Orthodox Churches, who attended the celebration of the 1025th anniversary of the Baptism of Russia, addressed Russian President Vladimir Putin with a request to do his best to stop persecution of the ethnic and confessional minorities in the Middle East.

The problem is being addressed in cooperation with the Russian Ministry of Foreign Affairs. For instance, a statement “Supporting the Human Rights of Christians and other Communities, particularly in the Middle East” was adopted by the United Nations Human Rights Council on the sidelines of its 27th session in March 2015. The statement was initiated by Russia, the Vatican and Lebanon. “Amazingly, it was the first ever expression of the understanding of the problem by the international community, – His Holiness underscored. – During the four previous years ‘nothing happened’ and only a few people spoke about the suffering of Christians. We know that cases of discrimination on any other ground become a hot topic for the international community which adopts decisive resolutions and declarations, but nothing of the kind has been done to defend Christians of the Middle East who have been being exterminated.”

“We hope that now, thanks to the active struggle of Russia against international terrorism the situation may change for the better, and I would like to know your opinion on the prospects,” His Holiness Patriarch Kirill said addressing the head of the Syriac Orthodox Church.

Also, His Holiness told the high guest about the activities of the Russian Orthodox Church in collecting and delivering humanitarian aid to the region suffering from the conflict. His Beatitude Patriarch John X of Antioch and All the East and the Grand Mufti of Syria, Sheikh Ahmad Badreddin Hassoun, distribute the supplied goods to those needy.

‘We know that the Syriac Orthodox Church has undergone a lot of suffering and sustained many losses because of the war, particularly in the regions of Aleppo and Homs, including the famous church Umm al-Zennar where a particle of St. Mary’s holy belt is kept. We know that your community has suffered a lot because of what is happening in Syria.’

The head of the Syriac Orthodox Church said in response: “On behalf of my brothers and myself I would like to thank you for inviting us to visit our sister ROC and Russian nation. We come to you from Damascus, the oldest inhabited city in the world, the city of St. Paul, St. Ananias and many great apostles and saints of the Church. We come to you bringing with us the pains of the Syrian people but also their aspirations and hopes.

“We are suffering because of terrorism and extremism that is brought to our countries; the presence of Christians is endangered.

“It is not for the first time that we come to Russia at the time of difficulty. This year we commemorate the 100th anniversary of the beginning of genocide against Christians in the Ottoman Empire.

“Hundred years ago many people from our community also came to Russia to take refuge escaping from killings and terrorism against Christians. And today we come to You, Your Holiness, both to thank You for your great stand with us during this difficult time and for many statements of support. We thank You for promoting peaceful resolution of the conflict in Syria, we thank You for the humanitarian aid that the Russian Orthodox Church is providing for the Syrian people.”

“Through Your Holiness and the Russian Orthodox Church, which is the soul of the Russian nation, we would to thank the Russian people in general for the support and especially for the military intervention of the Russians. We appreciate the sacrifices and their coming to our aiding in order to help us through this difficult time in fighting terrorism.

“We assure you that the majority of the Syrian people are grateful for this sacrifice, and the Iraqi people are looking up to Russia to help them in fighting terrorism.

“The suffering of the people is great, both Muslims and Christians are suffering, but specially our Christian brothers and sisters are being targeted not only because they are not siding with the so called revolution and opposition, but also for being Christians, for the their faith.

“Hundreds of churches and monasteries, some of them very ancient, of the 4th-5th centuries, are being destroyed, and thousands of people have been killed.

“Last week I was visiting an ancient town of Sadad mentioned in the Old Testament where a Syriac community numbering almost fifty thousand people lives. This town was attacked by a Muslim group in October 2013; forty eight people were killed. The town was liberated by the Syrian army, and people went back. However, last week that town was again threatened by the ISIS dash which took over another small town in the area; the St. Elijah monastery of the 5th century was destroyed. We were able to remove the elderly people, women and children outside of the town, and young people remained there to defend it.

“Thank God, they were able defend the town and push away the dash. I believe that this time the town was saved because people had a new hope with the Russian intervention in Syria. They hope that victory over terrorism and violence is possible with the help of friends.”

His Holiness Aphrem II said that more than 40% of Christians had already left Syria, mostly illegally, by risking their lives.

“This has great affect on us as a Church, as a community. Our people are losing hope and they ask themselves: do we still have a future in the land of our forefathers where they had lived for thousands of years before Christianity, during Christianity and since the coming of Islam.

“All promises given to us were never honoured. As we, Christians, have no oil, no natural resources, we are of no interest to the great powers, but we are human beings. Therefore the position of the Russian people and the Russian Church is very much appreciated. It does give us some hope that it is still possible for us to have peace and security and to live in the land of our forefathers.”

The Primates discussed prospects of bilateral dialogue that could make discussions between the Orthodox and the Ancient Oriental Churches held in the framework of the official theological dialogue since the late 1980s, more active. Also touched upon were other aspects of possible cooperation between the Russian Orthodox Church and the Syriac Orthodox Church.