Source: DECR
Natalya Mihailova | 10 March 2016
On 9 March 2016, a meeting between His Holiness Patriarch Kirill of Moscow and All Russia and Mr. Tomislav Nicolić, President of Serbia, took place at the Cathedral of Christ the Saviour in Moscow. 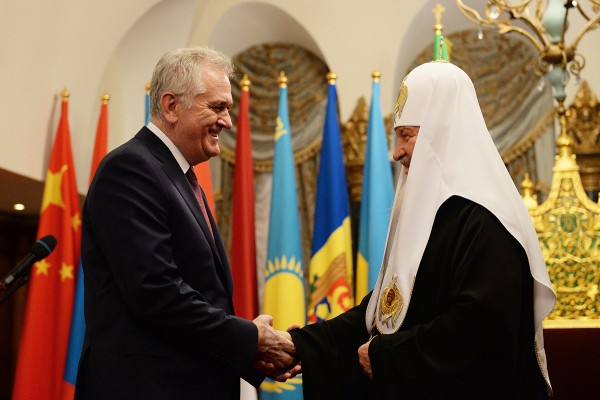 The head of Serbia was accompanied by Mr. Ivan Mrkić, Adviser to the President; Mr. Slavenko Terzić, Ambassador Extraordinary and Plenipotentiary of the Republic of Serbia to the Russian Federation; and Mrs. Dragica Nikolić, spouse of the President.

Bishop Antonije of Moravicí, representative of the Serbian Orthodox Church at the Patriarch of Moscow and All Russia, also attended the meeting.

His Holiness Patriarch Kirill greeted the high guest who had arrived in Moscow to take part in the awards ceremony of the International Public Foundation of the Unity of Orthodox Nations. “This prize was instituted by enthusiasts as far back as the time of His Holiness Patriarch Alexy II in order to reward the merits of those who contribute to maintaining fraternal relations between the Orthodox nations and preserving the Orthodox faith, and are marked by other achievements in politics, international relations, art and science,” the Primate of the Russian Orthodox Church said.

As His Holiness noted, there are many outstanding people among the laureates, and the award presented to the President of Serbia is a sign of acknowledgment of his merits in Russia.

The high guest thanked His Holiness for the meeting, saying in particular, “I regard this prize as an award for all citizens of Serbia who are faithful to Orthodoxy and committed to maintaining cooperation between the Orthodox nations.” The Serbian President noted that the award was an honour and at the same time a responsibility urging to exert efforts aimed at protecting the whole Christian world and, first of all, Orthodoxy from the threats and challenges facing people today.

Mr. Nicolić expressed his appreciation to His Holiness Patriarch Kirill for the aid that the Moscow Patriarchate renders to the Serbian Orthodox Church and the whole Serbia.

The Primate of the Russian Church and the President of Serbia discussed, among other issues, the situation of Christians in the Middle East.