His Holiness Patriarch Kirill meets with the President of Paraguay 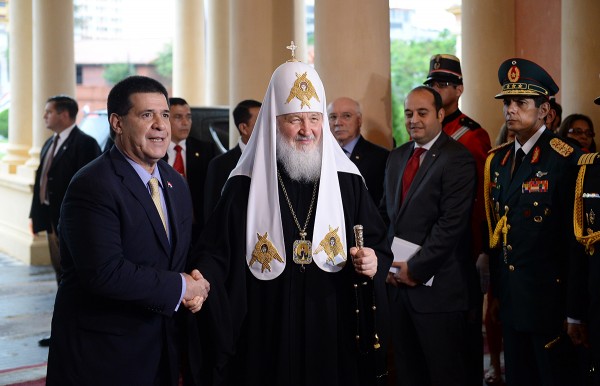 They discussed international relations and cooperation between the Russian Orthodox Church and the authorities of the Republic of Paraguay.

Taking part in the meeting were Metropolitan Hilarion of Volokolamsk, chairman of the Moscow Patriarchate’s Department for External Church Relations; Metropolitan Antony of Borispol and Brovary, chancellor of the Ukrainian Orthodox Church; Bishop Ioann of Caracas and South America; Bishop Antony of Bogorodsk, chief of the Moscow Patriarchate’s Administration for Institutions Abroad; and representatives of the highest authority of Paraguay.

After the exchange of gifts, the President of Paraguay and the Patriarch of Moscow and All Russia delivered speeches in the presence of the mass media. 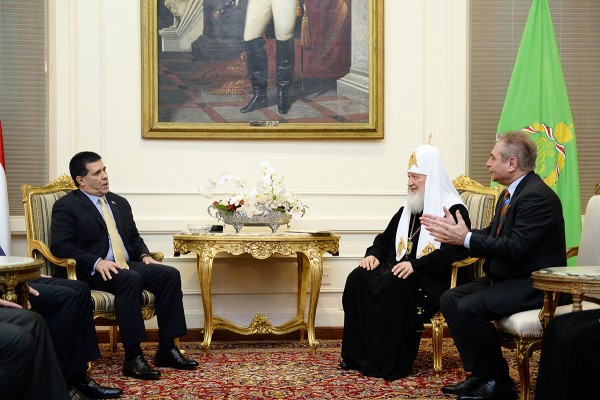 President Cartes said he was proud to receive the Primate of the Russian Orthodox Church in Paraguay, noting that this historic visit takes place seven months after Pope Francis’ visit to the country, and continued to say that it was the first visit of the Patriarch of the Russian Orthodox Church and reminded the audience that Paraguay had received many émigrés from Russia in the first half of the twentieth century. Many fought as volunteers in the Chako War and many had made a great contribution to culture, art, education and the development of agriculture.
President Cartes also noted a special importance of Patriarch Kirill’s visit as it takes place several days after his historic meeting with Pope Francis in Cuba, expressed deep gratitude to the Primate of the Russian Orthodox Church for his visit and invited the believers to lift up prayers for the continuation of the dialogue of solidarity.

Addressing the President of Paraguay, bishops, representatives of the state authorities and the mass media, His Holiness Patriarch Kirill expressed cordial gratitude to H.E. Cartes for hospitality and said that at present no one wonders why the visit of the Patriarch of Moscow and All Russia to South America has begun in Paraguay. ‘There is no other country in this part of the world where the names of the Russian heroes had been set in bronze in the hall of honour, or where the head of the state would recall them with respect. I wish the feat of the Russian heroes to be widely known all over the world and in my homeland. I believe their life to be an important bright page in the history of Paraguay and in the history of my country. 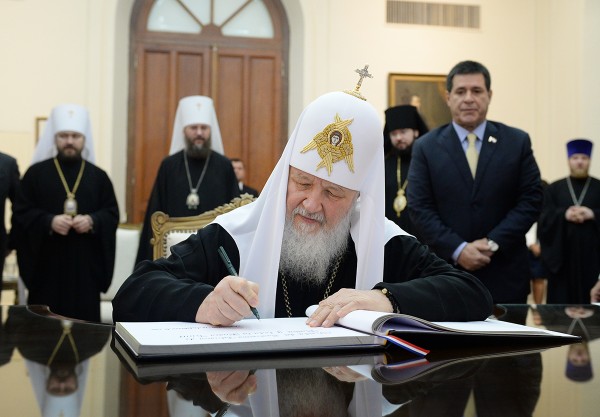 ‘Russian army officers, scientists and scholar had come to Paraguay driven from Russia by the civil conflict. They had found their second homeland here and courageously defended it. You cherish memory of the Russian people and remember their contribution to the development of military capability, science and education in Paraguay. We should use this page of our common history for the benefit of relations between Russia and Paraguay as a good historical basis for the development of our bilateral relations.

‘My visit to Paraguay takes place after my meeting with Pope Francis. We met in a warm and open atmosphere. It was not an exchange of niceties or just a scheduled meeting, but a serious talk that lasted two hours and was reported in our joint declaration. We discussed urgent problems of international life and the tragedy occurring before our eyes in the Middle East countries, mostly in Syria and Iraq. It is impossible to keep silence, it is necessary to speak loudly. I believe that our voice was loud enough, and people realized that Christians are killed and ousted from the places which the entire Christian family holds as sacred. This evil is being engendered by the terrorists who do not identify purposes and are prepared to kill anyone who is not like them. We know that they do not confine themselves by the battle ground in Syria and Iraq. The terrorists had blown up the Russian airplane, and 240 innocent people had lost their lives, killed innocent people in Paris, and one can continue this list of tragedies. It is our common trouble and common danger for the entire human family. Therefore we should have coordinated common strategies for these dreadful challenges.

‘Syria and all developments around this country must not provoke a conflict between East and West, and all forces wanting to conquer the enemy should act in concert with one another.

‘These thoughts were taken as a basis of an important part of the joint declaration. Also important were our words about the ousting of Christian values from the life of certain countries. Europe should not lose its Christian roots. Dechristianization of Europe is dangerous as it discriminates Christians and is hazardous for cultural and spiritual life.

‘We also talked about the Ukraine crisis. We are convinces that the Churches have no other message as the message of peace. It concerns Christians in Ukraine in the first place. We should learn to speak a common language without politicizing our message, but trying to bring witness about peace and justice and taking care for the unity of the Ukrainian people.

‘We have addressed the youth – our future, calling young Christians to undertake the responsibility for the future of Christianity. I will not comment on the declaration as a whole, but only say that this document is very important as it forms the basis for cooperation of the two Churches, first of all in finding answers to the contemporary challenges of human civilization.

‘Your Excellency, I would like to thank your again and say that I am visiting Paraguay with warm feelings. The country is not very big, but people living here are good, kind and cheerful. I invoke God’s blessing on you, the people of Paraguay and wish you prosperity and peace.’

Patriarch Kirill visits Paraguay at the invitation of its President.