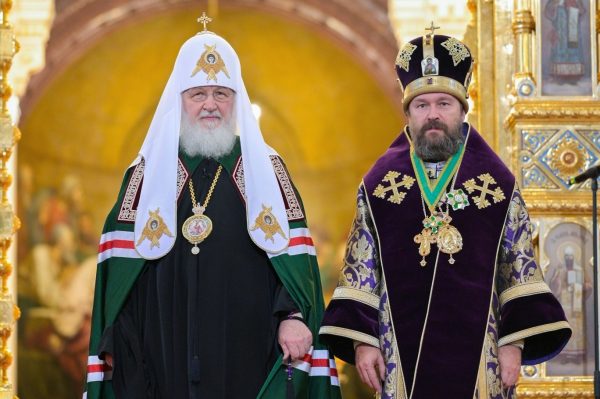 On September 27, 2021, the feast of the Exaltation of the Precious and Life-giving Cross, His Holiness Patriarch Kirill of Moscow and All Russia celebrated the Divine Liturgy at the Cathedral of Christ the Saviour in Moscow.

After the Liturgy, His Holiness Patriarch Kirill and his concelebrants venerated the Lord’s Cross. 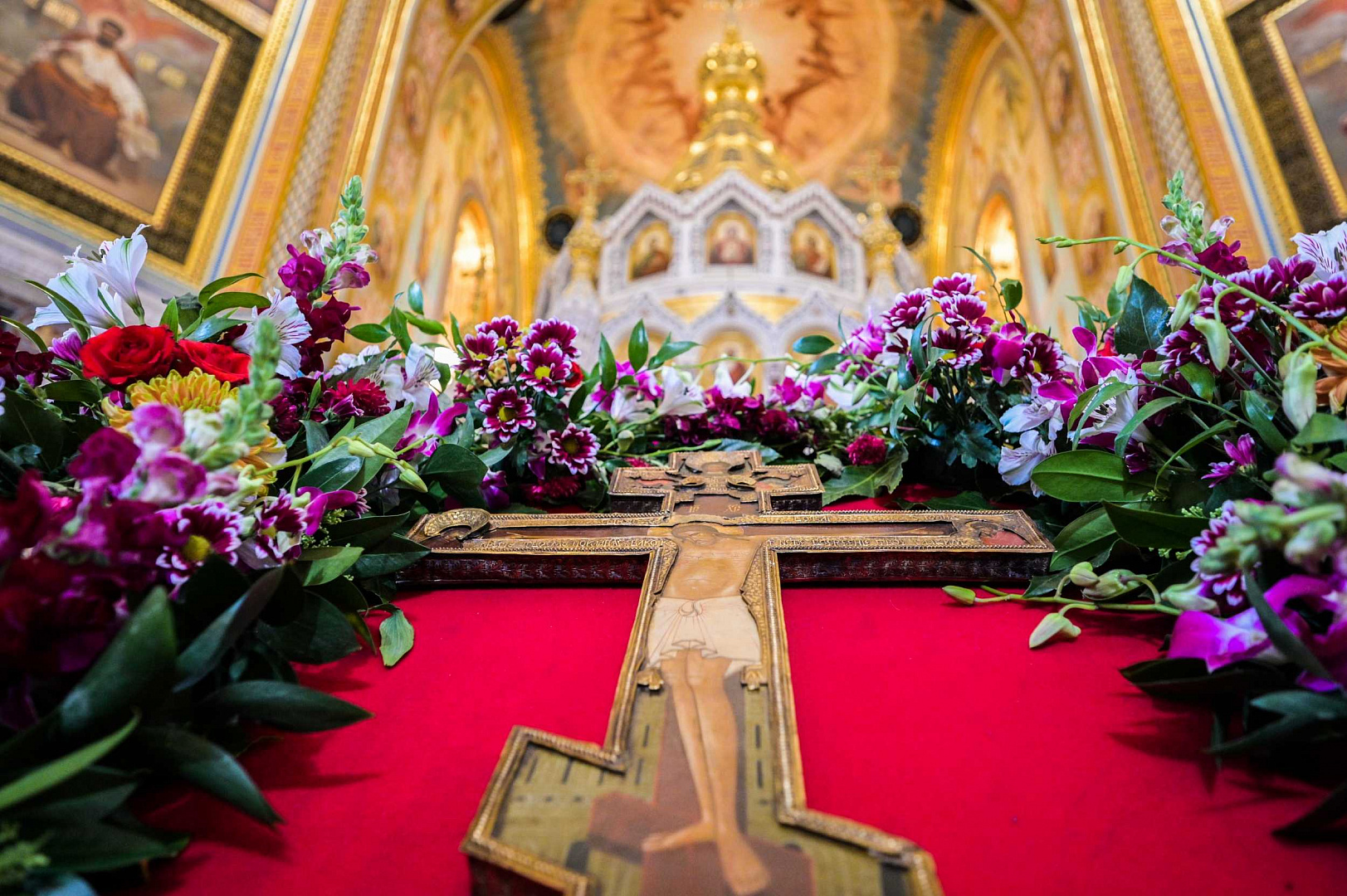 After delivering a sermon, His Holiness presented church awards on the occasion of the 75th anniversary of the Department for External Church Relations.

In acknowledgement of his archpastoral work for the good of the Holy Church and on the occasion of his of 55th birthday, Metropolitan Hilarion of Volokolamsk was awarded the Order of St. Sergius of Radonezh (Degree II).

In acknowledgement of his archpastoral work for the good of the Holy Church, Archbishop Leonid of Klin was awarded the Order of St. Sergius of Radonezh (Degree III);

In acknowledgement of his work for the good of the Holy Church, Archpriest Nikolay Balashov was awarded the Order of St. Seraphim of Sarov (Degree II);

In acknowledgement of his work for the good of the Holy Church, Archimandrite Philaret (Bulekov) was awarded the Order of St. Seraphim of Sarov (Degree II).

Having congratulated Metropolitan Hilarion and all the staff of the Department for External Church Relations on the anniversary, His Holiness Patriarch Kirill shared his memories of the time when he worked at the Department with which he has been bound since 1968, “I was a secretary to Metropolitan Nikodim, who headed the Department for External Church Relations in the hard time of Khrushchev’s persecutions and afterwards. From inside, I saw what tremendous strength, what strong faith, and what courage this work required, because much of what the employees of the Department did went against the general trend of the country aimed at weakening and, ultimately, completely dismantling religious life.”

In the bosom of this establishment, a wise and consistent work was carried out to stop the persecutions, to make them ineffective, to persuade the authorities “to stop the vicious practice of discrimination against believers”.

“It was the only establishment in our Church which, at the interface between church and state, defended our Orthodox Church”, His Holiness Patriarch Kirill stressed.

The Primate of the Russian Orthodox Church also mentioned that he himself headed the Department for almost 20 years. It was the time when the state system changed, when the economy was breaking down. And the Department leadership, exerted every effort to, on the one hand, preserve the establishment in the grave economic situation, and on the other, to make it capable of functioning and aiming at the solution of problems arising in the Church. “The Church sought to influence the people from inside so that they may preserve their spirit, Orthodox faith and love for their Motherland”, he pointed out.

He emphasized that among the most important tasks that the Department for External Church Relations faces today is “the work to overcome the schisms in the Universal Orthodoxy generated by the lawless, anti-canonical and <…> senseless invasion of the Patriarch of Constantinople into Ukraine”.

“I hope that His Eminence Metropolitan Hilarion, His Eminence Leonid, Father Nikolay, Father Philaret and the whole team of the Department for External Church Relations will do everything that is possible to overcome the schism in the Orthodox Church and some day to bring us together with heads of Local Orthodox Churches in this cathedral to celebrate the Divine Liturgy and take communion from one cup. We are confident that this will happen one day. However, in order to make this happen as soon as possible, in good time, as we say, we should pray together. The whole Church should pray for overcoming the divisions and the committed brothers and sisters who work at the Department for External Church Relation should work in this field”, concluded the Patriarch and blessed the department’s leaders and staff.

Metropolitan Hilarion, speaking on behalf of the leaders and staff of the DECR, thanked His Holiness Patriarch Kirill, saying:

Allow me, on behalf of the leadership of the Department for External Church Relation and all its staff, who were presented with high awards on your behalf already in summer, to cordially thank you for the Primatial attention that you give to the work of our department.

This work is not simple, indeed. If some believe it involves great joys or pleasures, they extremely misjudge. First, our work involves a great responsibility, because any mistake may cost very much. And we in our daily work feel the responsibility placed on us by you, Your Holiness, and the Holy Synod.

However, not everything depends on us. When a typhoon comes, when it tears rooves, breaks houses, there is nothing to do for people but to wait till it is over and afterwards to try to repair and restore what was broken. The disaster that has befallen the Orthodox Church, unfortunately, has already caused an enormous damage to both particular Local Orthodox Churches and the whole inter-Orthodox unity. But with gratitude we see that this typhoon has not directly affected our Church, which has remained united and unshakable and that the episcopate of our Church, clergy, monastics and the faithful – in Russia and in Byelorussia, in Moldavia and in other parts of the canonical space of the Russian Orthodox Church – feel their unity and are ready to struggle for it.

And for those who have lapsed into a schism we pray with a hope that they will become aware of the senselessness of their actions, return to the canonical path and that the unity of the world Orthodoxy will be restored.

As you have repeatedly reminded us, we have no other way to go but to follow the canonical tradition of the Church and to defend it despite all the winds that blow from various sides.

You may be sure, Your Holiness, that the Department for External Church Relations under your Primatial guidance will continue to help you to bear your Primatial cross in matters concerning external affairs. Of course, these are not only issues concerning the sphere of inter-Orthodox relations, but also those which concern communication with the non-Orthodox world, other religious traditions, and our compatriots abroad.

Your Holiness, you are almost of the same age as the Department for External Church Relations itself. You are only half a year younger than it. In this, too we see a divine special providence; for indeed, your whole life has been connected with the area of external church relations. When you were still a very young man you embarked on this path to head the Department for External Church Relations for almost twenty years. But today, too, you do not leave this area without your Primatial attention, which we hold very dear.

I would like to thank your from my heart for the awards you have given us and members of the Department for External Church Relations and to wish Your Holiness many good years of Primatial service”.