His Holiness Patriarch Kirill presides at the opening of International Conference “Prince Vladimir. Choice Of Civilization”

Source: DECR
Natalya Mihailova | 20 November 2015
The International research and practical conference, “Prince Vladimir. Choice of Civilization” opened at the Ss Cyril and Methodius Institute of Post-Graduate Studies in Moscow on November 18, 2015. His Holiness Patriarch Kirill of Moscow and All Russia presided at the opening ceremony. 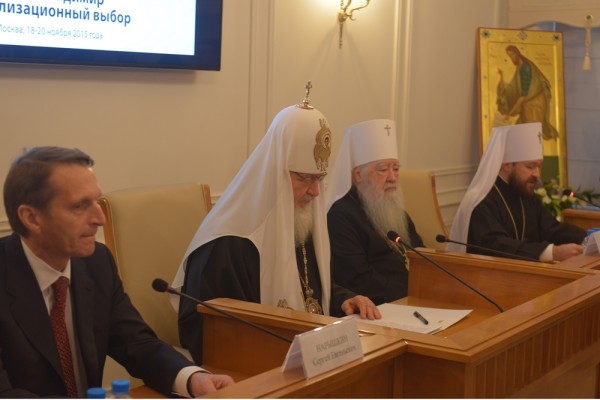 Metropolitan Hilarion of Volokolamsk, chairman of the Moscow Patriarchate’s Department for External Church Relations (DECR) and rector of the Institute of Post-Graduate Studies addressed the audience, noting that the Institute prepared the conference together with the Russian Historical Society in partnership with the State Historical Museum and the State Tretyakov Gallery.

Invited to the conference were the leading experts in the heritage of Prince Vladimir from Russia, Ukraine, Belarus and the distant abroad countries. Attending the opening were Ms Zelfira Tregulova, director of the State Tretyakov Gallery; Mr. Alexey Levykin, director of the State Historical Museum; rectors of the institutions of higher education of the Russian Federation; hierarchs of the Russian Orthodox Church; and representatives of the Local Orthodox Churches. 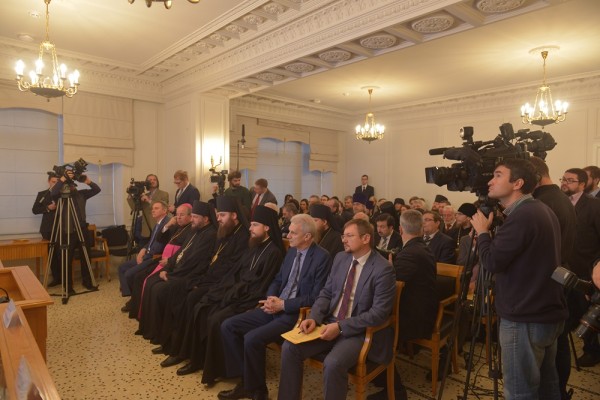 His Holiness Patriarch Kirill of Moscow and All Russia; Mr. Sergei Naryshkin, chairman of the State Duma of the Federal Assembly of the Russian Federation and chairman of the Russian Historical Society; Mr. Alexander Beglov, Presidential Envoy in the Central Federal District; Metropolitan Juvenaly of Krutitsy and Kolomna; and Metropolitan Hilarion were sitting in the presidium.

His Holiness Patriarch Kirill presented a report on the theme of the conference.

Mr. Naryshkin also addressed the conference, and Mr. Beglov conveyed greeting to the participants from the Russian President Vladimir Putin.

The ceremony of the cancellation of a postage stamp “Prince Vladimir – Baptizer of Rus” with 320,000 copies issued took place. Members of the presidium signed envelopes.

At the end of the first session Metropolitan Hilarion congratulated His Holiness Patriarch Kirill with his upcoming birthday on behalf the participants of the conference and faculty and students of the Institute, wishing him God’s help in his noble and responsible ministry as the Primate of the Russian Orthodox Church which is multi-million and multi-ethnic.

The DECR chairman noted that the conference had been intended to give people the opportunity to discuss the meaning of the choice of civilization made by St. Vladimir and the importance of the adoption of Christianity for national history.