Source: DECR
Natalya Mihailova | 27 August 2015
On 25 August 2015, His Holiness Patriarch Kirill of Moscow and All Russia met with members of the delegation of the Anglican Church in North America (ACNA), who had come to Russia on pilgrimage, at the Patriarchal residence in St Daniel’s Monastery in Moscow. 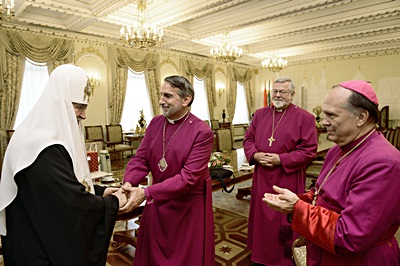 Among those who were present at the meeting were Archimandrite Philaret (Bulekov), vice-chairman of the Department for External Church Relations of the Moscow Patriarchate; Hieromonk Stefan (Igumnov), DECR Secretary for Inter-Christian Relations; and Deacon Dmitry Korneyev, a DECR staff member.

Greeting the delegation of the Anglican Church in North America, His Holiness Patriarch Kirill noted the difficulty of the situation in which this denomination had been established six years ago. “At the time your Church was undergoing a very difficult period in her history, which required from believers fortitude and the ability to resist great temptations,” His Holiness said.

“It is my firm belief that in the course of her history, the Church faces challenges which she must overcome with all her courage,” he continued, “There are two models of behavior of the Church and Christians. The first one implies obedience to secular power and those mighty forces that influence the development of society. The second one implies the ability to tell the truth and show commitment to Christ’s glad tidings.”

As the Primate of the Russian Orthodox Church noted, the second model always implies martyrdom. “There is nothing new in it. The Lord said that we should follow the narrow path leading to the Heavenly Kingdom. A wide and nice path will not lead us there,” he said, “Here, in Russia, we realized it in the hard times of persecutions of our Church. We also could choose one of the models of behavior, and I thank God for granting fortitude to our predecessors who followed the only right path and never fell away from the Apostolic faith and the Tradition we received through the Apostles and holy fathers.”

“For a moment it seemed that the Church had no future here, for the majority of people would not associate the future of our country with Christianity,” His Holiness Patriarch Kirill continued. “Yet, the Lord changed the course of history in several days, and those who had been regarded as outcasts and retrogrades, turned out to be heroes courageously defending their beliefs.”

The guests thanked His Holiness Patriarch Kirill for the warm hospitality and noted that the Russian Orthodox Church, defending the Gospel principles, showed an example of firmness in faith to representatives of traditional Christianity on the American continent, and that the feat of new martyrs and confessors of the Russian Church supported and inspired American believers to follow Christ. Archbishop Foley Beach emphasized that His Holiness Patriarch Kirill enjoyed high personal authority in the Western Christian world which today faces increasing challenges of aggressive liberalism and secularism.

The participants in the meeting discussed the processes going on in the Anglican Communion in recent years, as well as prospects of Orthodox-Anglican dialogue. Archbishop Foley Beach told about a positive experience of bilateral dialogue between the Anglican Church in North America and the Orthodox Church in America.

Also discussed at the meeting were practical aspects of cooperation between the Anglican Church in North America and the Russian Orthodox Church.