His Holiness Patriarch Kirill receives Prior and Administrator of Basilica of St. Nicholas

Source: DECR
Natalya Mihailova | 05 December 2015
On 2 December 2015, His Holiness Patriarch Kirill of Moscow and All Russia received representatives of the Roman Catholic Church: the Revd Ciro Capotosto, prior, and monk Vincenzo Marulli, housekeeper-administrator of the Basilica of St. Nicholas in Bari, Italy. 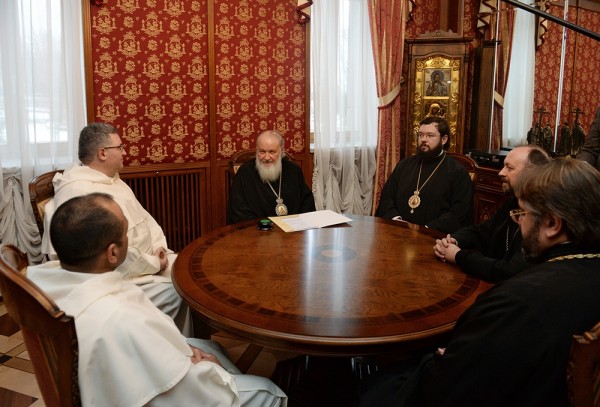 His Holiness greeted the guests and told them that he had cherished recollections of his first visit to the Basilica of St. Nicholas in December 1969 accompanying Metropolitan Nikodim of Leningrad and Novgorod.

His Holiness continued to say: “Bari is a sacred place for Orthodox Christians like Mt. Athos or holy sites in Palestine” and underscored that very many members of the Russian Orthodox Church are visiting Bari. These visits are of great spiritual importance for relations among the Churches. “Theologians discussing theological issues sitting at the table is one thing, but people contacting our brothers in the West, moreover at the holy site, is quite another matter. It is very important not only maintain our relations on theological level, but also to feel one another in our hearts.” His Holiness wished the Roman Catholic Church success in pastoral ministry in Italy and the Italian people to keep faith in their hearts despite any kind of temptations.

“The success of your mission among the Italians is important not only for them. It is very important for the development and strengthening of relations between our Churches, the Primate of the Russian Orthodox Church underscored. Therefore we appreciate that the Catholic Church is upholding the same Gospel values as the Russian Orthodox Church. For our pilgrims it means that while in Bari they feel at home among their brothers and sisters.”

His Holiness thanked the representatives of the Roman Catholic Church from Bari for attention they pay to the pilgrims from Russia and for good relations with the St. Nicholas Patriarchal metochion in Bari and its rector, the Very Revd. Andrei Boitsov. “We are very glad that the pilgrims’ house was returned to the Russian Orthodox Church as it has given us an opportunity to increase the number of pilgrims to Bari.

The guests cordially thanked His Holiness Patriarch Kirill for an opportunity of pilgrimage to Russia and for meeting with him.