In his message to Patriarch Mar Ignatius Zakka I Iwas of the Syrian Orthodox Church, His Holiness Patriarch Kirill of Moscow and All Russia expressed his deep grief over the abduction of Metropolitan Boulos of Aleppo (Patriarchate of Antioch) and Metropolitan Mar Gregorios Yohanna Ibrahim, head of the Syrian Orthodox Archdiocese of Aleppo. The text of the letter is given below: 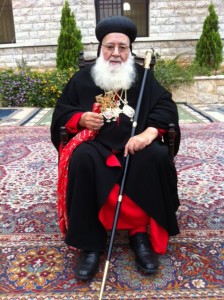 I was deeply grieved to learn about the abduction of two Christian hierarchs in Aleppo – Metropolitan Boulos of Aleppo and Metropolitan Mar Gregorios Yohanna Ibrahim, head of the Syrian Orthodox Archdiocese of Aleppo.

We have once again become witnesses of a brutal and cynical act committed by those whom some mass media try to present as champions of liberty and democracy. This terrible act clearly exposes the real goals of those who have unleashed bloody confrontation in Syria.

Our Church prays for the health and soonest release of the abducted hierarchs. In this hour, we stand together with all Syrian Christians, suffering and grieving.