Source: DECR
Natalya Mihailova | 24 September 2015
His Holiness Patriarch Kirill of Moscow and All Russia sent a message of greetings to the Catholicos-Patriarch Elect of the Assyrian Church of the East, Mar Gewargis Sliwa. 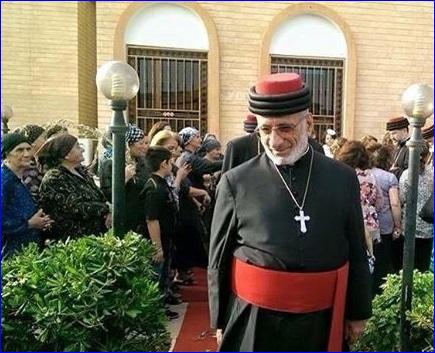 Patriarch-elect Sliwa, the 111th patriarch of the Church of the East, will be consecrated at St. John's Cathedral in Arbel on Sunday, September 27, and will assume the name Mar Gewargis III.

Assyrian Church of the East

Please accept my cordial greetings with your election as Catholicos-Patriarch of the Assyrian Church of the East.

You have been entrusted to perform your Primatial ministry in a time of great tribulations that have befallen the ancient land of Mesopotamia. Terrible sufferings have been inflicted on the Assyrian people, as already occurred in the past. Many of its sons and daughters have died or lost their homes; ancient shrines, churches and whole cities and towns have been destroyed.

You have firsthand knowledge of this tragedy, since the territories where the flame of war has been kindled are a part of the Metropolia of Baghdad, which you have headed for many years. It is important that with your election, the See of Assyrian Patriarchs is again relocated to Mesopotamia, its original place.

I hope for the development of good relations established between the Russian Orthodox Church and the Assyrian Church of the East under your late predecessor, His Holiness Patriarch Mar Dinkha IV. His radiant image lives in my soul, and I cherish recollections of our last meeting in Moscow in May last year, in which you also took part.

I wish you good health and spiritual strength in your future ministry. I also wish the soonest restoration of peace and prosperity to the Assyrian people.